"Will this calm the out camp down?" Certainly not

Reporting on the changes in the Vote.Leave campaign Isabel Hardman asks "will this calm the out camp down?". The answer has to be, certainly not. The changes are not enormous but look a little like surrender to pressure: Lord Lawson takes over the chairmanship; he is already President of Conservatives for Britain and one of that organization's Vice-Presidents, Lord Forsyth, also joins the Vote.Leave board.

John Mills, the previous Chairman, becomes the Vice-Chairman (reportedly, he is satisfied with that arrangement) and intends to concentrate on Labour support for Brexit. John Mills was he Campaign Manager in 1975 for the ill-fated Out campaign.

The board now becomes non-executive with Matthew Elliott, the Chief Executive, Dominic Cummings, Campaign Director and Victoria Woodcock, Company Secretary, stepping down from it thought they will remain in their positions and will be able to attend board meetings.

Where does that leave Arron Banks, Leave.eu and the proposed merger between the two groups? We have not yet heard anything about it but as news come in I shall update this blog.
Posted by Helen at 12:51 AM 1 comment: 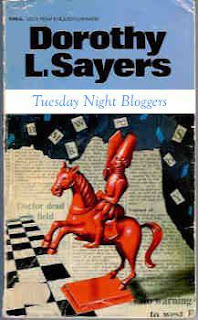 There is a change in this month's programme: the writer is Dorothy L. Sayers who has figured a number of times on the Conservative History Blog and so I have decided to write about her there and link each week from here. I shall also be collecting other other postings on the subject and will put up the links here and there.

First off the mark is Kate Jackson with a very carefully analyzed piece (as befits the subject) on Gaudy Night, that marmite of a novel, published on her blog, crossexaminingcrime.

Moira Redmond on Clothes in Books writes about the first four Wimsey novels. These are generally described as being weaker than the later ones but I am not so sure. The plot of The Unpleasantness at the Bellona Club and the detection in it are, in my opinion, are the best in the entire canon.

Noah Stewart on Noah's Archives produces a pictorial collection of the many different Sayers titles, including The Recipe Book of the Mustard Club, for which Sayers's husband, Mac Fleming, contributed most of the recipes.

On The Art of Words Lucy Fisher picks up on some infuriating "corrections" that actually make nonsense of the original and some misunderstood emphases.

Bev Hankins writes about the Dowager Duchess of Denver on My Reader's Block and manages to make that, in my opinion, thoroughly infuriating person sound remarkably attractive.
Posted by Helen at 11:38 AM No comments: