How far can one stretch liberalism? 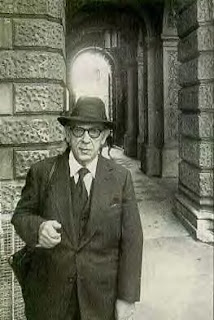 Among other anniversaries 2009 is the 100th one of the birth Sir Isaiah Berlin, writer, historian, philosopher, raconteur, memoirist and Oxford personality. He is highly regarded by many (and rightly so) as one of the definers of true liberty and true liberalism. There were, however, many other aspects to his activity.

On Sunday I went to a memorial meeting in Pushkin House, which is a sort of centre of Russian cultural activity in London. The talks, discussions and reminiscences centred on Berlin’s links with Russia and Russian culture, particularly his well-known meeting with the great poet Anna Akhmatova in 1945 and 1946 when Berlin was at the British embassy in Moscow.

Other reminiscences went along the lines of “And then Berlin asked me what’s the news from Russia and I said not a great deal but we now have lots of leaders to quote whereas before we had only one”. Less than fascinating to anyone who is not a complete groupie.

The Akhmatova meetings have been well analyzed by memoirists and scholars both in Russia and the West. Their own memories are not entirely reliable but the poetry that Akhamatova spun out of the meetings, the references in “Poem without a Hero” to the “guest from the future” and the third dedication, which is clearly to Berlin, though in 1956 she could hardly admit to this, are all the stuff of legends, as is Akhmatova’s rather strange conviction that the Cold War was triggered off by those meetings.

However, one thing was triggered off: a renewed and more ferocious persecution of the poet that included public attacks by the Culture Commissar Andrei Zhdanov, a yet another arrest of her son Lev and the eventual arrest of her second (but that time ex-) husband, the well-known art historian, Nikolai Punin. Lev Gumilyov survived all his arrests, Punin did not, dying in camp in 1953.

Nobody has ever managed to discern whether Berlin understood the damage he had done to Akhmatova as his versions of the tale changed with every telling.

The only reference to Sir Isaiah’s non-Russian activity was by Professor Alexander Pyatigorsky, whose fascinating biography was matched by an eccentric mode of delivery.

Enunciating every syllable in a slightly melodramatic way, Professor Pyatigorsky told us that Sir Isaiah was the last of the REAL li-be-rals and added with a capital L though, I suspect he meant with a small l. He compared Berlin to Professor Leonard Schapiro. Both of them, he said were open to all points of view, accepted all opinions.

In this, I think, Professor Pyatigorsky was unfair to Professor Schapiro, who was a real liberal in that he believed in liberalism, freedom and the rule of law. He also understood that those concepts had to be defended, sometimes ferociously. Not for him the notion that all opinions were equally valid.

Sir Isaiah Berlin was of a very different mentality. His liberalism frequently slid into a moral paralysis. One rather amusing story was told at the meeting by Valentina Polukhina, professor of Russian Literature at Keele and expert on Joseph Brodsky’s life and works.

It seems that for Brodsky’s fiftieth birthday she arranged a series of interviews about him, one of them being with Isaiah Berlin. To her grief and astonishment the great man talked in harsh and critical terms about the poet. Polukhina realized that he must have been influenced by another Russian poet, Anatoly Naiman, Brodsky’s great rival. The interview was published but Polukhina then arranged for another one and this time Berlin spoke of Brodsky with love and admiration.

Polukhina explained this by a somewhat child-like attitude to life, which meant that “Isaiah” would be influenced by the last person he spoke to. Some of us would describe it more harshly.

Some years ago, Isaiah Berlin’s name came up in a conversation I had with a right-wing academic, one of those who had been under severe attacks in the late sixties and early seventies from left-wing student leaders and New Left academics while spineless university authorities helplessly and metaphorically wrung their hands.

Many of them were surprised and disappointed by the fact that the doyen of liberal thinking, the man who had defined the notions of liberty, Sir Isaiah Berlin OM, would not defend them or speak up on their side, preferring to see everybody’s point of view and, on occasion, prevaricating.

My response was that I did not think this was simply a matter of moral cowardice but a real inability to understand the difference between those who speak up for freedom and those who speak up against it. Berlin, in my opinion, could not see that a true liberal has to take sides.

I came to this conclusion a long time ago when, as an undergraduate, I read Sir Isaiah’s essays on Russian radical thinkers, first published in the magazine Encounter and collected into one volume in 1978. These studies were immensely influential: they introduced generations of scholars to Russian political philosophy, created new courses in universities and, most importantly, influenced Sir Tom Stoppard to write his magnificent trilogy “The Coast of Utopia”. (I saw it in the National Theatre and it is magnificent though much disliked by the leftish theatre critics.)

There were two problems with those essays and their influence. One was that Berlin confirmed and, possibly, enforced the view that the only thinking in Russia was on the left, ranging from the liberal Alexander Herzen and Ivan Turgenev to the more radical and totalitarian Mikhail Bakunin or Petr Tkachev. This is a view with which the eminent historian Richard Pipes has been battling with for some time.

That may be described as a sin of omission. There was, however, one of commission as well. Sir Isaiah Berlin, the doyen of liberal thought and the man who defined the two kinds of liberty, saw no real moral or political difference between the various strands of thought. He did not like the Bolsheviks but his view of his Russian subjects, be it Herzen, who was largely liberal in his views, though leaning to socialism, or Tkachev who was a radical totalitarian, was usually benign. They were all fighting against tsarism and, naturally enough, some of them were a little carried away but, his “liberalism” suggested, one must accept all those points of view.

It is this view that has influenced the study of Russian nineteenth century thought in British universities. (I am not sure about American ones and would welcome information.) Alternative points of view have been frowned upon and often discarded. It is not surprising that a man whose idea of liberalism stretched into political relativism in theory should have prevaricated in practice.
Posted by Helen at 2:03 PM