Marvel Comics are in trouble. Captain America, the hero of thousands of adventures and the idol of tens of thousands of children seems to have gone slighly dulalee. The superhero who fought Nazis, Commies and "took on those who burned the American flag during the Vietnam era" is now taking on .... anti-tax protestors, who look remarkably like the Teaparty Movement.

Anti-tax protestors are America's enemies? What would an eighteenth century Captain America have done about those pesky Bostonians who were chucking tea overboard?

Issue 602 of the comic features Captain America investigating a right-wing anti-government militia group called "the Watchdogs". Hoping to infiltrate the group, Captain America and his African-American sidekick The Falcon observe an anti-tax protest from a rooftop. The protestors depicted are all white and carry signs adorned with slogans almost identical to those seen today in Tea Party rallies like "tea bag libs before they tea bag you" and "stop the socialists."

The Falcon mentions that the gathering appears to be "some kind of anti-tax protest" and notes that "this whole 'hate the government' vibe isn't limited to the Watchdogs." He then tells Captain America that he doesn't think their plan will work because "I don't exactly see a black man from Harlem fitting in with a bunch of angry white folks." Captain America then explains that his plan entails sending The Falcon in among the group posing as an IRS agent under the thinking that a black government official will most certainly spark their anger.

Well, I don't know about Harlem but plenty of Teaparties did have black people attending them. And Asian, and Hispanic and various all sorts.

It seems that, just like the Bostonians, the Teapartiers of today are not taking any of it lying down.

The clear implicit attack on the Tea Party Movement was first noticed by Publius' Forum's Warner Todd Huston. When a minor uproar ensued, Marvel Comics editor-in-chief Joe Quesada spoke to Comic Book Resources and defended the issue while apologizing for the panel that seemed to tie real-life Tea Party protesters to the fictional group depicted in the book.

Saying that he could "absolutely see how some people are upset about this," Quesada said that there was "zero discussion to include a group that looked like a Tea Party demonstration," adding, "There was no thought that it represented a particular group."

Quesada then went on to say that Marvel would "apologize for and own up to" a series of "stupid mistakes" that led to them "accidentally identifying" one of the members of the protest group "as being a part of the Tea Party instead of a generic protest group." He explained that they were on deadline to get the issue to the printer for publication, and in the course of sending it off it was noticed that the signs in the scene contained no words or phrases. He said the editor then asked the letterer to "fudge in some quick signs" and that in the "rush to get the book out of the door," the letterer "looked on the net and started pulling slogans" from signs captured in photographs at Tea Party protests in order to make them appear "believable."

In response to Marvel's explanation and apology, Tea Party Nation founder Judson Phillips told Yahoo! News that it "sounds less like a genuine 'we're sorry' than it does a 'we're sorry we got caught' statement." 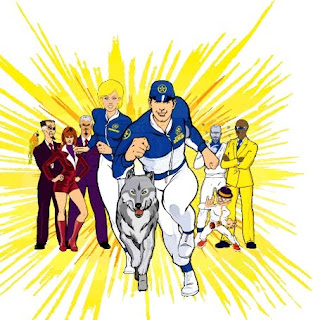 do think, however, that these people need to look at some real art in comics. What about the great Captain Euro, the Aryan looking hero of European integration and his arch-enemy, the hook-nosed, semitic looking Dr D. Vider, the businesman and employer of dark-skinned, moustachioed underlings. Here as an introduction to the whole sorry saga of failed propaganda.
Posted by Helen at 5:12 PM