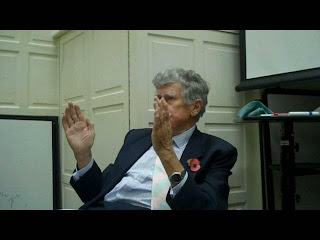 It was actually late on Friday evening when an American friend put up the news on Facebook: he had heard from another friend and colleague that Ken Minogue had died on the way home from the Mont Pelerin Society meeting at the Galapagos. Why has it taken me so long to write about a man I liked and admired as a thinker, a great force in politics and as a dear friend? Somehow, I feel it is appropriate to write about him on July 4, American Independence Day, when many English and, as some of us say, Anglospheric ideas were codified on the other side of the Pond, even if it meant a break with the mother country. (And a nasty war between American colonists as well as between some of them and British forces. Then again, America's loss of the Loyalists was Canada's gain after the war.)

Minogue, as John O'Sullivan pointed out in his piece on the CPS website


was born in New Zealand, brought up in Australia, and adopted by Britain when he arrived here in the 1950s. He never lost contact with the Antipodes which he visited regularly and to whose intellectual life he contributed through lectures and articles in such influential outlets as “Quadrant” magazine. He was a proud holder of the Order of Australia. In later life he visited the United States regularly to write, lecture, and research. All in all he was a citizen of what Goldwin Smith called “the moral federation of the English-speaking world” - though this did not prevent his playing a lively part in European debates, most recently in lectures to the Instituto Bruno Leoni in Milan.

Being a man of the English-speaking world but also one who loved European culture and knew European history and ideas he was, naturally, an opponent of the European Union. He was also an opponent of the growing bureaucratization of politics, of the managerial tendencies shown in the various unaccountable organizations, whether national or transnational and of the subsequent destruction of genuine liberalism and individual liberty.

His last book (apparently he was working on another one but that, alas, we shall never see) was The Servile Mind, which was subtitled How Democracy Erodes the Moral Life. Here is the publisher's summary:


One of the grim comedies of the twentieth century was the fate of miserable victims of communist regimes who climbed walls, swam rivers, dodged bullets, and found other desperate ways to achieve liberty in the West at the same time as intellectuals in the West sentimentally proclaimed that these very regimes were the wave of the future. A similar tragicomedy is being played out in our century: as the victims of despotism and backwardness from third world nations pour into Western states, the same ivory tower intellectuals assert that Western life is a nightmare of inequality and oppression.

In The Servile Mind: How Democracy Erodes the Moral Life, Kenneth Minogue explores the intelligentsia’s love affair with social perfection and reveals how that idealistic dream is destroying exactly what has made the inventive Western world irresistible to the peoples of foreign lands. The Servile Mind looks at how Western morality has evolved into mere “politico-moral” posturing about admired ethical causes—from solving world poverty and creating peace to curing climate change. Today, merely making the correct noises and parading one’s essential decency by having the correct opinions has become a substitute for individual moral actions.

Instead, Minogue posits, we ask that our government carry the burden of solving our social—and especially moral—problems for us. The sad and frightening irony is that as we allow the state to determine our moral order and inner convictions, the more we need to be told how to behave and what to think.

One cannot help admiring the courage of any modern writer on political philosophy who casts doubts on the concept of democracy - the holy of holies - in the name of moral and liberal ideas.

There really is no need for me to go through Ken Minogue's many academic achievements as the obituaries have done that but before I move on to my own personal views and memories, I'd like to quote Roger Kimball, another of Ken's close friends and publisher of The Servile Mind.


Ken was one of the merriest, most gentle, and most philosophically acute people I have ever known. He was also one of the most hospitable. He and his late wife, Beverly Cohen, presided over countless dinner parties at their London house, where the wine and comestibles were as delightful as the conversation was wide-ranging and tonic. (I should also record that Beverly made the best steak and kidney pie I have ever had.)

Ken’s jovial temperament — it was rare indeed to find him without a smile on his lips and a twinkle in his eyes — was disarming. A student of the philosopher Michael Oakeshott, and for many years a beneficent presence at the London School of Economics, Ken was deeply respected by a profession he regarded with, shall we say, a certain ironical distance. Nevertheless, despite the high regard he commanded, it was my impression that many people tended to underestimate Ken. His coruscating intelligence was too obvious to overlook, so people took refuge in the idea that his character lacked steel. Ken was clearly a conservative, but could anyone possessing his calm demeanor and emollient personality really be counted a staunch conservative? If a body wasn’t that, how could he be a reliable ally?

Such people were wrong about Ken. He was the staunchest of allies, it’s just that he didn’t like bruiting it about. Ken’s was a deeply interrogative temperament. The world, and the people in it, puzzled him. I remember the occasion, fairly early in our friendship, when we were lunching at the Garrick Club in London. We somehow got round to the subject of utilitarianism, whose basic axiom is that the test of value is whether a given policy affords the greatest happiness for the greatest number of people. If that were true, Ken mused, then imagine someone invented a machine that could eliminate highway fatalities, those tens of thousands of deaths per annum, only it needed to be fed 6 people at random to work. Most of us would recoil from such a solution, but why? We spent a tonic hour over the wine and the ice cream with crystallized ginger (a Minogue favorite) teasing out the answer.

First of all, let me put it on record that Beverley Minogue who, sadly, died three years ago not only made the best steak and kidney pie but was the only person in my experience who made the most marvellous steak and kidney pudding.

Secondly, nobody who knew the Minogues could forget their joint warmth and hospitality; nor could anyone remember with anything but a smile the sight of Ken in some public forum and the sudden grin that would split his face as he greeted his many friends or just made some comment that seemed nothing but jolly until one analyzed it at leisure.

Although Ken Minogue wrote for the fabled Encounter magazine at the time my father did as well, my own friendship with him is much more recent. Ken was one of the founders of the Bruges Group, chaired it for some years and retained a close interest in its doings. It was through that and other eurosceptic organizations that I knew him and through other friends became friends with him and Beverley. There are few things in my life I am more pleased and proud of than this friendship and few things I shall recall with greater pleasure than the various lunches, dinners, outings to the theatre (once to see the wonderful production of Guys and Dolls with Adam Cooper as Sky Masterson) and the cinema, and the many talks about subjects that ranged from musicals and Hollywood films to serious political ideas.

I was not surprised to hear that he delivered the best paper at the Mont Pelerin Society meeting at the Galapagos. All Ken's papers were highly lucid, informative and entertaining. Some years ago I ran a programme of informal talks in the Red Lion Pub in Parliament Street, called, unsurprisingly, the Red Lion Talks. Many of them of high quality but the one that packed out the room and the stairs outside with people hanging on to the banisters was, inevitably, Ken Minogue's in which he dissected the whole concept of European state building.