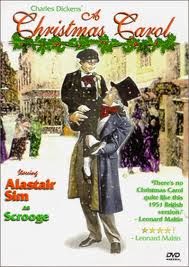 Time for me to spread my usual Christmas gloom and misery. Let us start with that iconic Christmas book, Charles Dickens's magnificently well written and utterly ridiculous A Christmas Carol. Gosh, it's a silly book despite the language and the characters (well, one character). Why oh why, I ask every year, does Bob Cratchitt not either change his job (not an indentured slave) or stop having children. In fact, one wonders how on earth he and the missis manage to have children that often. They are not likely to have a great deal of privacy. As for Tiny Tim, don't even start me on him. Little horror. But it is still worth reading if just for the description of the blind beggars' dogs pulling their masters away from Scrooge as he trudges down the street before his highly ridiculous reform. Presumably the dogs will be all over him after it.

And now on to the other iconic Christmas offering, also an astonishingly good and astonishingly silly work of art, the film It's A Wonderful Life. Here is the ending, which shows that George Bailey's rather frustrated and circumscribed life was ALL WORTH IT and also that the people who got money out of him for ... ahem ... sub-prime mortgages were actually not that badly off. I have to admit to still liking the film. It has an excellent cast with James Stewart at the head (who could ask for anything more?) and is a little more complex than its sacchariney reputation has it.

Normal service will resume after the holidays.

Merry Christmas to one and all.
Posted by Helen at 12:08 PM