Well, I was wrong but I was also right. I said that the hastily issued amnesty will not extend to Mikhail Khodorkovsky and it did not. Nevertheless, the man has suddenly been snatched from his Siberian labour camp and brought out to Berlin, released on the say-so of Tsar Vlad the Impaler. So I was wrong on that: I did not think he would be released and wondered whether Putin would be mad enough to have a third case against his arch-enemy.

Although the BBC's website led with the story of two completely unknown people who used to work for a celebrity cook not being found guilty of whatever they were accused of, most of the rest of the media led with the astonishing story of President Putin announcing on Thursday that he was thinking of pardoning Mikhail Khodorkovsky just because he has spent ten years in prisons and labour camps (he was due out next August, incidentally) and the man's appearance outside prison and then in Berlin on Friday. a mediaeval monarch could not have done better. So I say and so it shall be.

Mind  you, we have been here before with the dear departed (more or less) Soviet Union. Remember the sudden exchange of Vladimir Bukovsky for the Chilean communist Luis Corvalán even though the Soviet Union had "no political prisoners"? Or when Alexander Solzhenitsyn was suddenly bundled out of the USSR? Now it is Khodorkovsky's turn and the rumours and speculations are rife. Nobody knows what the deal is but most people (especially if they are Russians who have lived in the comfortable West all this time) has opinions.

An interesting article on Echo Moskvy [in Russian but can be translated] analyzes the ten-year long (actually a trifle longer) battle or chess game between the two and speculates as to what might have prompted this latest move and what might happen next. At least, the author freely acknowledges that he has no idea but he doubts whether Putin has really won this time any more than he has done in the past. After all, the net result of Khodorkovsky's imprisonment on trumped up charges was that the world was endlessly discussing his fate, Putin was questioned at every international press conference, the subject was raised by various foreign politicians. The man just would not go away and as he was not killed in the first few months it all became very difficult.

For ten years Khodorkovsky held out and now he asked to be released because his mother is being treated for cancer and he wants to be with her. His own statement affirmed that he was not acknowledging his guilt. Putin may have shown himself to be more powerful but Khodorkovsky has once again grabbed the moral high ground. 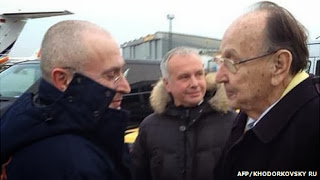 Western media outlets like Der Spiegel have been speculating that the very limited amnesty and this latest move are part of Putin's belated effort to make the Sochi Olympics in February an international success rather than something of an embarrassment with Western leaders staying away, if not in droves, then in respectable numbers. Will this work? After all, those leaders are getting worked up about the treatment of LGBT Russians not the general state of human rights, which is deplorable, to put it mildly. How will Russians react if various leaders stay away from Sochi? Will they feel humiliated and blame Vlad for it or will they be angry because self-righteous Westerners dare to lecture them? Clearly, the Prez is not taking any chances.


It also appeared to show that Putin is feeling confident in his control of the country after facing down street protests when he was re-elected last year.

Again, maybe. Certainly Khodorkovsky immediately raised the subject of others who have been unjustly imprisoned, particularly those involved in his case. Platon Lebedev, his co-defendant, is still in a labour camp.

There are numerous other stories out there but all tread the same paths, raise the same points and speculate along the same lines.

What will Khodorkovsky do now? Meet his family and rest, one assumes. And then? Will he lie low for a while, giving a few interviews and then staying quiet? Hard to believe. Will he become a kind of modern day Alexander Herzen? That is possible. After all, as has been pointed out, Mikhail Khodorkovsky, the successful businessman, the putative reformer of Russian business and political practices, trod a well known Russian path: while in Siberian labour camps he became a symbol of resistance and a man of conscience.