Much noise about victims but very limited sympathy

Yesterday's Prom concert was Bach's St John Passion, a very fine work and a very fine performance, though I have to admit to listening to it on the radio. In the interval there was a discussion with a couple of the performers about the work and about the Gospel on which it was based. In the course of that discussion there was talk about the fact that of the four Gospels, St John's is the one that makes the Jews as a whole the guilty party. This was not the main point of the discussion but it is worth noting that, in many ways, the Mediaeval anti-Semitism grew out of that extraordinarily beautiful work, the Gospel according to St John.

We have moved on from there and over the ages anti-Semitism has changed shape and turned up in many forms. I do not think it is particularly controversial to point out that its most recent manifestation is not connected with the Christian Church or the more traditional right-wing groups: it is now almost entirely on the Left and is "justified" by horror at Israel's actions against the Palestinians who are clearly everybody's favourite victims in one way or another.

The day saw yet more anti-Israeli demonstrations, including one that brought the centre of London to a halt, though, it fell far short of the projected march of a million.

As ever we saw and heard a mixture of slogans and chants. Many carried the usual mass-produced Socialist Workers' Party posters that called for an end to the siege of Gaza. Clearly these people had not considered the possibility that if Hamas stopped spending the money it gathers from the world in the form of huge international aid on rockets that are fired into Israel day after day or tunnels through which they try to smuggle terrorists into that country, the "siege" might be lifted.

Nor do they consider that, possibly, if Hamas abandoned parts of its Charter, acknowledged Israel's right to exist, stopped using the Palestinians in Gaza as gun and propaganda fodder but started negotiating, concentrating on economic development (by which I don't mean luxurious existence for the Hamas leaders), there might be some change in the situation.

In fact, there would be some change if Hamas agreed to the various cease-fire proposals. We did have a few hours of it earlier today but Hamas has, apparently, not agreed to its extension and so fighting will resume.

Well, one cannot expect people who turn out to demonstrate for the currently most fashionable cause to do much thinking.

The other slogans, as ever, were a curious mixture: on the one hand, Israel was compared to Nazi Germany (the comparison, regardless of what one thinks about events in Gaza, is not in the slightest valid but is likely to be particularly hurtful to Jews), on the other there were, as usual, threats or promises to finish what Hitler started (an unlikely scenario). In a number of cities, Paris being one, there were attacks on Jewish premises and businesses. As in the past, what may have started as support for the people of Gaza has gone well beyond criticism of a particular country's policy and has morphed into anti-Semitism. There really is no other way of describing what is happening in this picture, taken in Paris yesterday. 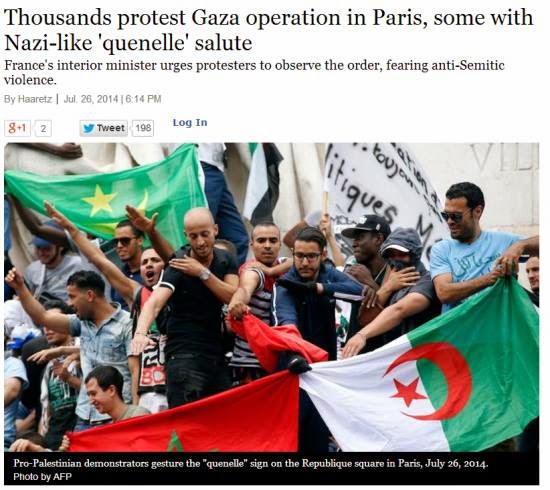 This description on Breitbart gives a fair account of what was going on.


The activists were keen to avoid discussing the thorny issue of the Hamas rocket attacks on Israel. Instead they chanted things like: "1,2,3,4, Occupation No More" and "5,6,7,8 Israel is the terrorist state." Then they went on to a familiar classic: "from the river to the sea, Palestine will be free"; a reference to wiping out the State of Israel, and relates to the land between the Mediterranean Sea and the River Jordan - better known as the Jewish state.

In the meantime, the Middle East is, indeed, burning and far worse things are happening in other countries. The media has more or less given up on events in Syria but the activities of ISIS in Iraq still merit some mention though not exactly any great horror. One wonders whether the feminist organizations that, for some reason, have ranged themselves against the only Middle Eastern country where women have equal rights think about the news that

The Sunni insurgents, who have declared a caliphate in parts of Iraq and Syria and have threatened to march on Baghdad, also listed guidelines on how veils and clothes should be worn, part of a campaign to violently impose their radical brand of Islam.

Mosul, let us not forget is the place where one of the world's oldest Christian communities is being destroyed through murder, rapine and what might be called religious cleansing. We hear little from the world about it.

We hear little about the fact that in Libya there is now a full scale civil war going on and the United States has evacuated its embassy (a wise precaution, given certain events in that not too distant past).

We hear little about the daily figures of dead, wounded and displaced in a number of Middle Eastern countries. If Israel is not involved, the media and the loud-mouthed "supporters of the Palestinians" don't want to know. Muslims who try to raise the issue of the far greater number of victims in other countries on various sites, get barracked.

In fact, those "supporters" do not want to know that even UNWRA, an organization that exists, against all the supposed rules on which the UN and its off-shoots are based, to aid and abet the Palestinians and their leaders, are saying that it might well have been Hamas rockets that hit the UN school in Gaza, killing several children and wounding more.

Neither they nor organizations that are supposed to be fighting for children's rights are interested in the story that Hamas used children to build the network of tunnels (though not terror tunnels as the author of the piece explains in the comments section) during which 160 of them were killed.

The conclusion one has to draw from all this is that not only do these people not care about other problems and other violence in the Middle East, they do not even care all that much about the Palestinians, unless they are under Israeli attack. Here is an excellent piece by Cranmer, written on Thursday but nothing much has changed since then.


Curiously, there is no mention of Assad's persecution of Palestinian communities or the fact that he has "starved and murdered" thousands of them.

No mention of the Palestinians in Iraq who are subject to "discrimination, sectarian violence and ruthless killing by the Iraqi government".

No mention of the mass expulsion of Palestinians by Arab Muslim countries, like Saudi Arabia, Libya and Kuwait, of which Yasser Arafat declared that "what Kuwait did to the Palestinian people is worse than what has been done by Israel to Palestinians in the occupied territories".

Israel has killed some 700 Palestinians in its latest offensive in Gaza. Every death is a tragedy, especially those of children. Some of the pictures coming out of the war zone are brutal, distressing and heartbreaking. God weeps at the suffering. If He has meaning and purpose in the pain, it is lost to the world's baffled intellects.

But it is a curious that Israel should be constantly singled out for special treatment.


It is, indeed, curious. One is driven to the conclusion that what motivates all these "activists" of whatever nationality is not so much sympathy for the Palestinians, which is obviously very limited, as something very different: a much older and much uglier emotion.
Posted by Helen at 12:55 AM