This time even the BBC noticed

There is a reasonable argument that this time round Hamas has overplayed its hand. Not that we don't see the usual fanatical and usually quite ignorant anti-Israeli comments but, as this piece on Bloomberg points out, the voices that usually pressurize that country have been mooted somewhat. It also places the blame for this round of fighting firmly on the Hamas leadership, who have stirred up Israeli reprisals without endangering themselves very much. Well, perhaps, the day will come when the Palestinians will finally realize who their real enemy is and go after the leaders.

It seems that Hamas is being blamed by the Fatah leader, Mahmoud Abbas, as well. Then there is this curious clip that indicates a certain dissatisfaction with Hamas on the part of Arab states and, above all, leaders. The speaker is the Egyptian journalist, Abdel Bari Atwan. More on the Egyptian media here. There have been other similar pronouncements and a certain lack of enthusiasm for Hamas and its fight.

That has not prevented a number of very violent demonstrations in the West, which degenerated into torchings and riots (a picture from Paris but there are many more) and were accompanied by vicious anti-Semitic and Judaeophobic slogans that invoked positively Hitler and the Holocaust, expressing the wish that it will now be completed by Islamists. (One can't help laughing at the thought of these losers, for what else have the Palestinians been all this time, completing what Hitler did not manage but the intentions and slogans are nasty enough.)

Naturally enough, we have seen many pictures of dead Palestinian children, something that we are used to though some of us have been asking questions about those pictures for some time. Remember Green Helmet Guy? Similar stories were uncovered by other bloggers but these were left severely alone by the MSM though little by little some acknowledged the word Pallywood. Come to think of it, remember the whole saga of Mohammed Al-Dura?

So what of the various pictures of the children and the "innocent civilians" of Gaza? Well, something odd has been happening. As the Blaze points out, no less than the BBC found that a number of them have been recycled from previous wars in Gaza, from Iraq and from another war of which we hear next to nothing from these angry twitters and Facebook posters, and that is the far more ferocious one in Syria.

Here is the BBC's report on the subject. If these people have lost the BBC they are in a bad state.

So let me end this posting with a picture of a singularly unfortunate lady who seems to have been wounded in Syria and in Gaza in precisely the same way, in the company of the same old lady. Some people have no luck. (Ignore the comment on the green strip, which is superfluous in my opinion.) 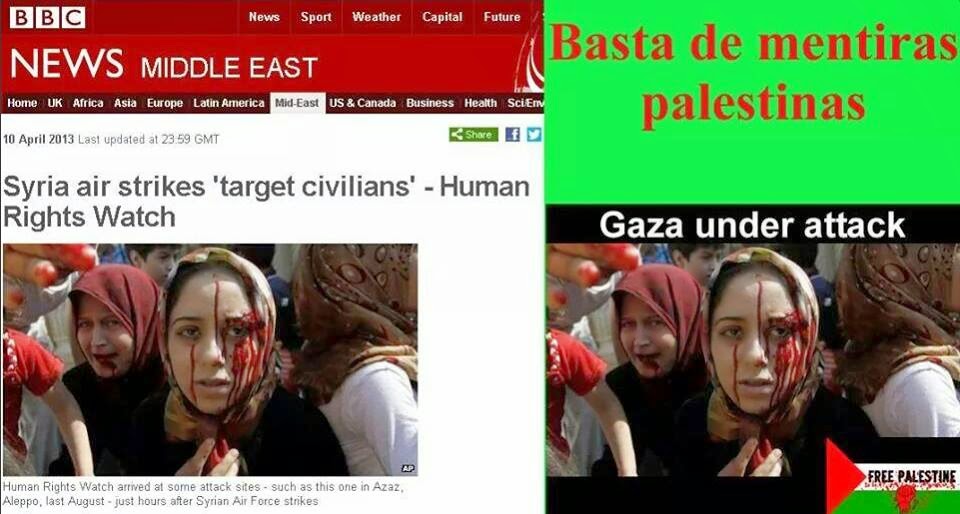