Mohammed and the V&A

This story has been languishing a little because few people knew what to make of it. For reasons that will become clear, I still find it somewhat hard to work things out. However, it has to do with self-censorship in one of our largest cultural institutions so this blog has to get involved.

Last Sunday The Independent published a worrying article, entitled: V&A removes depiction of Prophet Mohamed from website amid 'severe security alert'. Uh, what? Just as we are hearing from various experts that early (pre-Wahhab) Islam had no problems about depicting not just human figures but the prophet himself, as for instance in this delightful 16th-century Turkish image of Mohammed welcoming Jacob, from the ‘Zubdet ut Tevarih’ by Lokman (1583): 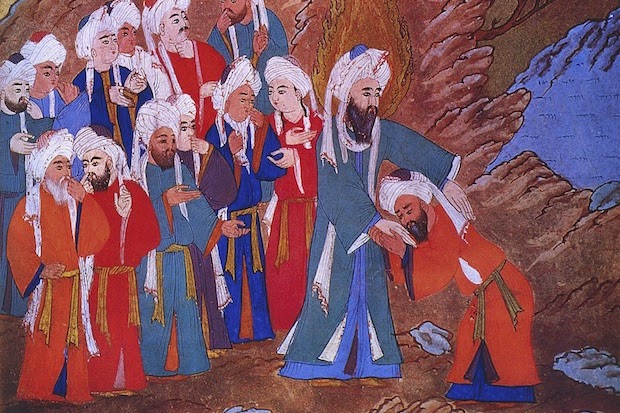 In fact, anyone who has ever been in the British Museum would have seen Persian and Turkish paintings of Mohammed and various other figures from the Bible and the Koran (they often overlap).

So what's with this picture that has been removed by the Victoria and Albert Museum?


The Victoria & Albert museum has removed a depiction of the Prophet Mohamed from its website amid security concerns just three weeks after the Charlie Hebdo attacks.

The gallery mistakenly claimed not to have had any depictions of the prophet in its collection following the violence by extremists in Paris earlier this month.

But after a US expert drew attention to a poster with an Iranian artist’s view of the prophet in the V&A's collection it was quickly removed.

This has fuelled questions over censorship which scholars fear could undermine our understanding of Islamic art.

“The V&A has one poster in the collection which depicts the Prophet Muhamed," a spokeswoman told The Independent.

“The image of it has been removed from our online database but it remains in our collection and as with most of our reserve collections would be made available to scholars and researchers by appointment.”

All a little incoherent, especially as the image of the poster (not of great artistic value in my opinion but that is not the point) still appears to be there. 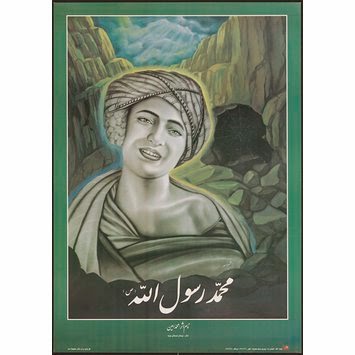 On Tuesday Barnaby Rogerson picked up the story in the Spectator and called the rather dubious poster "an historic image of the Prophet Mohammed". Well, it dates back to 1990 so it is historic but it is not one of the old paintings or miniatures and it seems to be easy to find on the website still.

However, Mr Rogerson goes further and enumerates various other examples of self-censorship, exercised by various people who ought to know better.


Last week, an art scholar friend of mine, who is incidentally a Muslim, told me that things are getting worse. He has been doing valuable work for many years, teaching the basic principles of Islamic design to young craftsmen who are keen to reconstruct in carved wood, plaster and painted tile their own Islamic heritage, which has been destroyed by war and revolution. You would have to say that he stands on the side of the angels in this work, for which he is paid only travel expenses. He packs in centuries of artistic development in an accessible three-day or week-long course of lectures, which is also a wonderful testament to his travels and taste, for they are beautifully illustrated by the slides he has taken over the years. You might have thought he would be honoured, but after one of these recent lectures he was arrested by the police of his host-nation and told that he had a choice: either destroy all the slides on his computer or be thrown into jail. His crime was to have shown a beautiful book illustration of the Prophet, veiled in a halo of light, ascending to the heavens.

An unpleasant story, whichever way you look at it but why is the "host-nation" not named? Could the Spectator be exercising its own brand of self-censorship?

This, however, is enormously interesting and gives the lie to the V&A's assertion that it holds not pictures of Mohammed:


We have become so inured to this process that it can be a shock to stroll into a second-hand bookshop and see how free the 1960s and 1970s were from this iconoclasm. To take an example, look at a copy of Emel Esin’s study of the two Holy Cities, entitled Mecca the Blessed, Madinah the Radiant. It is a book that oozes piety, scholarship and devotion, and also has dozens of beautiful illuminated images of the Prophet and his family. If you tried tracking down the various images from the dozen museums proudly cited in the acknowledgements to this book, including lots from the V&A, you would now enter a world of selective silence.

Or, in other words, it is all nonsense about Islam not allowing the depiction of human beings or even of the Prophet Mohammed. It is simply that the more vocal (sadly) section of the huge world-wide Muslim population is going through a violent iconoclastic phase. There is no need for the rest of us to abide by it.

Mr Rogerson's article is well worth reading in full. It is not long.
Posted by Helen at 4:43 PM