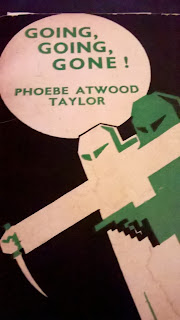 This blog is now back as part of the Tuesday Night Bloggers' Club and the author this month is Phoebe Atwood Taylor, a remarkable American thriller and detective story writer, who wrote under her own name a series about the Codfish Sherlock, Asey Mayo, a detective I took to as soon as I read a short story about him, under the name Alice Tilton about a retired English teacher, Leonidas Witterall, who looks so like Shakespeare (a likeness he tends to help along, naturally enough) that he is usually called Bill and under the name Freeman Dana just one thriller, Murder at the World Fair.

I have read only one Witterall book, The Iron Clew, which is being written about by a number of my co-bloggers, all of whom know far more about Ms Atwood Taylor than I do (I shall put up links at the end of the posting) but I have read several Asey Mayo ones and decided to have another look at them as well as try to find some new ones.

It so happens that I have devoted some attention to tales of crime at the home front in the Second World War. Partly that is because I have found that Foyle's War, heavily praised to me by a number of people, is available on YouTube and I watched the first three and partly because I picked up a Patricia Wentworth novel, The Clock Strikes Twelve, which deals with a crime back home, the story taking place in the last few hours of 1942 and first few days of 1943. Astonishingly, a number of comments of Goodreads and even on relevant blogs get that wrong, largely I suspect, because the notes on the cover say 1940 rather than 1942 but the date is made clear in the book. This does make one wonder whether people always bother to read detective stories before they comment on them.

Setting aside Foyle's War, I became interested in the difference between the way the war is covered by the two writers, both of whom set a number of their novels in those years. For a reason I cannot quite work out Patricia Wentworth needed to have a good many young men involved in the plot and had to think up reasons as to why they were around instead of some far-off shore or, at least in an army camp. Usually, it is because they do research and are far too good at it to be sent off for ordinary soldiering.

When people do get sent off we do not know where it is. Could be the Middle East, could be somewhere else. Of course, the war was a lot closer and information had to be controlled a great deal more. Or, possibly, the Ministry of Information thought that by this control of information morale was kept higher.

Not so in Cape Cod where everybody seems to know where their young men are serving. Jobs are taken on by their elders and the womenfolk who seem to manage better than the young men - does not bode well for that homecoming. If Eddie's kid sister and aunt are better at running the garage and petrol pump than he ever was, how is he going to cope when he returns from the Pacific?

Asey Mayo is, probably, too old to be called up and, in any case, his work is vital for the defence industry. Unfortunately for him, however vital it is, he still goes home on leave to be roped into all sorts of unpleasant activity such as going to an auction by his cousin Jennie and to become involved in criminal activity of various kind. Doc Cummings looks after the sick of the home front and is beginning to find it something of a chore but he can always relax by helping Asey Mayo or patching up when he has been knocked out AGAIN. Really, the man gets into more jams than Sexton Blake.

So the situation is far more relaxed - nobody gets unpleasant telegrams (or letters either), nobody seems to worry about the way the war is going or not going, in fact nobody bothers to talk about it. Not that they do much in The Clock Strikes Twelve either. It is entirely possible that people kept their sanity by not discussing the war news.

Then there is rationing. It is easy to forget that there was rationing in the US as well, though it was clearly not as stringent as in Britain, let alone on the Continent. It is hard to tell from the novel what, apart from petrol and car tyres, was rationed but bacon seems to have been though not clams. (One wouldn't want riots in New England.) Naturally, where there is rationing, there is barter and even black market though the latter is not mentioned in the Taylor novel.

Barter yes: when Asey Mayo forgets to bring his ration book with him, Jennie has to swap two jars of put up strawberries for breakfast bacon into which Doc Cummings manages to make great inroads. Could it be that butter and sugar were not rationed? Certainly Jennie seems to be able to produce an unlimited amount of sugared ginger bread and strawberry shortcake without any mention of margarine.

We are told that the earlier Asey Mayo novels are darker, perhaps reflecting the effect of the Depression. By the time the wartime books were written, the darkness had been lifted and the books are hugely entertaining. Going, going, gone has its sad moments but few and far between - mostly it is a screwball comedy with people popping in and out of doors and windows often misunderstanding everyone else's motives. The war seems a very long way away.