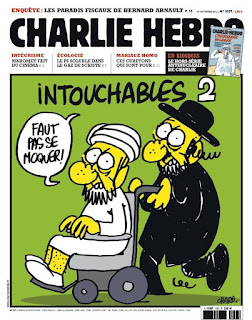 This time the French satirical magazine Charlie Hebdo (about which I wrote here, here and here) has decided to go for equal opportunities insults with a cover that shows Mohammed in a wheel chair being push by a Hassidim rabbi. Inside there are, apparently, more cartoons of the Prophet, including some that show him naked. (No nonsense about toplessness.)


Yes, dear reader, you are quite right: those not particularly good cartoons have caused all sorts of problems with representatives of one of the "insulted" groups (funnily enough, not the other) demanding satisfaction and the French authorities running around, heightening security in all sorts of places, especially for the coming Friday.

The French government, which had urged the weekly not to print the cartoons, said it was temporarily shutting down premises including embassies and schools in 20 countries on Friday, when protests sometimes break out after Muslim prayers.

Arab League Secretary-General Nabil Elaraby called the drawings provocative and outrageous but said those who were offended by them should “use peaceful means to express their firm rejection”.

Tunisia’s governing Islamist party, Ennahda, condemned the cartoons as an act of “aggression” against Mohammad. It urged Muslims, in responding to it, to avoid falling into a trap designed by “suspicious parties to derail the Arab Spring and turn it into a conflict with the West”.

“We will try to keep things managed and peaceful, but these things easily get out of hand. I fear there could more targeting of foreigners, and this is why I wish they would not persist with these provocations,” he said.

In the northern Paris suburb of Sarcelles, one person was slightly hurt when two masked men threw a small explosive device through the window of a kosher Jewish supermarket, a police source said, adding it was too early to link the incident to the cartoons.

We shall just have to wait and see, I suppose. Would it be possible for some other publications across the world to show some solidarity with Charlie Hebdo on the basis of "I may not agree with your views but I shall defend to the death your right to express them"?
Posted by Helen at 9:18 PM