Well, something good has come out of it 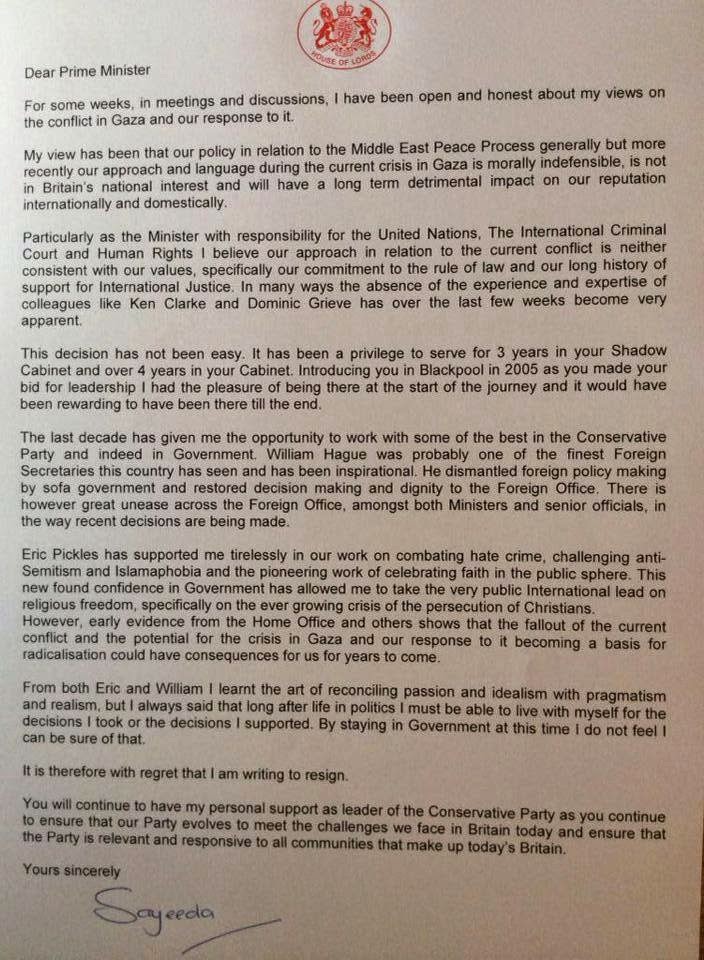 On another forum somebody said in our discussion, mostly rather gleeful, about Baroness Warsi's resignation that it turned out that the Gaza conflict was in Britain's national interest, after all. That may be a slight exaggeration but, on the whole, there has been little sorrow shown at the resignation (probably just ahead of a final sacking for incompetence) of this government's least capable and most over-promoted Minister. Yes, I know: them are fighting words and I look forward to people challenging me with other names.


Warsi’s resignation is classic Warsi. Attacks her own team, pure grandstanding, and shows that she is a quitter. Her resignation does nothing to help the innocent civilians on both sides who are suffering. She had a much better chance of helping support the ceasefire if she had stayed inside Government. But instead she has thrown in the towel.

He also quotes a few other people, none of whom are shedding any tears. I understand, also that she has chosen a day when the Chancellor is due to make an important speech. No, I don't care much about those speeches either but I am not a senior Conservative politician. Why eactly did she choose today of all days? And why, since we are talking about crassness and grandstanding, did she announce her resignation on Twitter before actually tendering it? (Sharp-eyed readers will have spotted that she or her minions have mis-spelled the word Islamophobia in paragraph 6 of her letter.)

On the other hand, Labour politicians appear to be pleased but that is unlikely to upset anyone, Tory or not.

Two things I find quite extraordinary: one is that Baroness Warsi actually managed to work out what the government's Gaza policy was and that she did not agree with the Foreign Secretary's rather inane comments I blogged on before. Moving on from there, it is hard to know what she thinks the government's policy should be. Does she think we should have sent our few remaining troops to support Hamas (whose stated policy is to use civilians as human shields is a good idea? (I have seen a comment on another forum to the effect that Warsi resigned on the day when an effective truce, or so it would seem, has been noted for the first time in Gaza.)

Cranmer's blog post is interesting. He seems to have found more admirable qualities in the lady in the past than I have but it is true that she has, on occasion, made negative comments about forced marriages and other nastiness. He, too, finds it hard to understand what it is she dislikes about the government non-existent policy and wonders what she would like to see in its place:


But she has resigned from the Government over its policy on Gaza, which she says in "morally indefensible".

This is curious, not least because Foreign Secretary has not articulated any policy at all on the matter. Still green in the job, one gets the impression that he studiously straddling fences and balancing on pinheads in order to avoid offending anyone, possibly in order to bolster the Muslim vote.

But perhaps that is Baroness Warsi's problem. She clearly believes that HM Government ought to join in the global choruses of condemnation denouncing Israel, accusing the Zionist aggressor of war crimes and demanding sanctions. She insists that all arms exports to Israel must stop. And since the FCO isn't prepared to dance to that tune, she has decided to clear her desk and resign.

Perhaps that is a good thing.

I hope His Grace in correct in his brief analysis of what the FCO is and is not prepared to do.

He seems to have followed the good lady's pronouncements a good deal more closely than I have and this is what he has to say:


For all the praise heaped upon her over the years by this blog, she has, of late, completely lost the plot. She lectures us about "true Islam", and mocks those who expose the paucity of her theological understanding. She tweets and tweets about Sharia finance, seemingly oblivious to the religio-cultural significance of the policy. She convened a committee to propagate global religious liberty, but it met only twice for coffee, said absolutely nothing and achieved even less. And she answered many of her critics with veiled allusions to 'Islamophobia', thereby shutting down any valid criticism of her incompetence and deficiencies.

There was a feeling, if not the perception, that this 'Senior Minister of State' had made something of a hobby out of being in the Cabinet, and was using her position in the FCO more for faddish personal interests than the weighty matter of implementing government policy. William Hague was prepared to indulge her and the Prime Minister humoured her: she was symbolically important for Tory detoxification, modernisation and Cameroon rebranding project. It was important that the first female Muslim in the Cabinet was seen to be happy, fully integrated and successful.

She will be missed, he adds, as the election campaign starts.

Will she? I am not so sure. The Conservatives are not likely to gain any more Muslim votes by pandering to the worst possible versions of it, like sharia law or support for terrorists. At present, most Muslims, if they vote at all, will support Labour (and let us not go into the details of some of the voting practices) unless there is someone like George Galloway is standing. Those Muslims who have actively decided to vote Conservative will do so, regardless of whether Baroness Warsi is in the government or not.

Here are a few other reactions:

Tim Montgomerie reminds us that she was effusive in her support of Hamas in the past.

Isabel Hardman in the Spectator:


There had been a concerted campaign in the Conservative party from senior figures with a great deal of influence to get Warsi moved. They felt she was being deeply unhelpful to Downing Street, particularly by going on ITV’s The Agenda and posing with a front page about Eton Mess. But the judgement that the Prime Minister and others took was that it is far safer to keep Warsi, who is a prolific diary-writer, safely in the tent, rather than outside. That she has gone of her own accord does at least mean she will not be tempted to exact revenge. But it’s by no means safe to bet that she will stay silent. She has resigned because she disagrees with the government position on Gaza, and presumably she will want to elaborate on what precisely she disagrees with, at the very least.

As for whether this has a seriously destabilising effect on the government’s foreign policy, Warsi’s insecure position does not necessarily mean that ministers can simply shrug her criticisms off. They come just a few days after Ed Miliband argued that the Prime Minister was not being sufficiently robust in his dealings with Israel. Then, Downing Street accused the Labour leader of playing politics, and Chris Grayling even went so far as to say he was undermining Britain’s efforts to secure peace. It is one thing to say that of an Opposition leader, but if one of your Conservative colleagues makes the same accusation – and the detail of the gripe leading to her resignation may well turn out to be in the same vein as Miliband’s criticism – it is quite a different matter. It gives credence to Miliband’s line if a Foreign Office minister feels she cannot support the government’s position.

On the whole I tend to go with the line that the government has no real policy in Gaza and has no real power to effect anything there. In which case, Baroness Warsi's resignation will be seen for the empty posturing it is and a general desire not to draw too much attention to the twin facts that her job was largely make-believe and her abilities non-existent.


The most over-promoted, incapable and incompetent minister of recent times has finally done the nation one service and resigned.

There is more there but people should read it for themselves. He does enumerate her many political "car crashes", just one of which would have lost anyone else their position. But not Baroness Warsi. This, however, is particularly interesting:


Her time in government was filled with disasters. She repeatedly narrowly avoided being sacked. Her car-crashes mostly came over her attempts to develop what was effectively a parallel set of policies to those of the British government of which she was meant to be part. Word was that she had become increasingly angry after various reshuffles in which it became plain that she would never be given a ministry. She doubtless concocted in her mind various conspiracies as to why this might be, but the reason was single and obvious: she did not have the ability.

Realising that this ambition was to be thwarted, she manoeuvred to turn her position in Cabinet into one which was somehow meant to ‘represent’ Muslims. Purest, as well as dangerous nonsense. Everybody in Cabinet is there to represent everybody in Britain. But Warsi encouraged sectarianism rather than diminishing it. And where she could have used her position to side-line the extremists within Britain’s Muslim communities, she spent more of her time trying to stop people criticising the extremists within Britain’s Muslim communities. She was a notable behind-the-scenes critic of genuine Muslim reformers, in particular.

That she was manipulating behind the scenes in favour of the more extremist Muslim groups in this country, I have heard before from good sources; that she thought she would become Foreign Secretary on William Hague's resignation, is news to me. It shows that the woman is quite seriously delusional as well as everything else.

Word is now that she has been an assiduous diary keeper and is, undoubtedly, already in negotiations to have those screeds published. Sadly, for the lady, living politicians' diaries may have been interesting when Tony Benn's and Barbara Castle's were published in a different political atmosphere. They are no longer so.
Posted by Helen at 8:53 PM