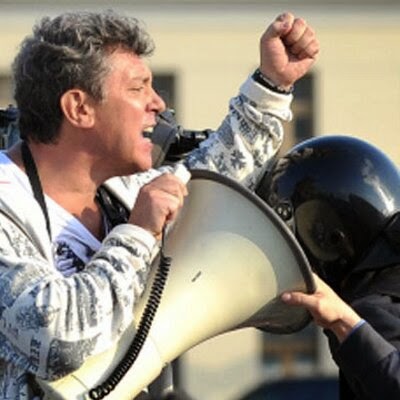 Readers of this blog know that it is not a great fan of President Putin's but it has always maintained that, bad and vicious and tyrannical though the man is, he is no Stalin. On the whole, I still think that but as the news of Boris Nemtsov's assassination and of the immediate official reaction to it came through I was not the only person who recalled another assassination, that of Sergey Kirov on December 1, 1934 and what came out of that.

The assassination was undoubtedly professional and well organized. Whoever was in that white car from which the shots were fired knew exactly what route Mr Nemtsov was going to take and when. In connection with this one has to ask questions about his companion, apparently a young woman, called Anna who had come from Kyiv just a few hours previously. That is what another oppositionist, Ksenya Sobchak, has said. The young woman herself has been taken away by the police for interrogation and not been seen since.

Bravely, the people of Moscow have been streaming to the site, which was cleaned up after a couple of hours (so thorough) and laying flowers. The opposition groups are planning what was going to be a march for peace in Ukraine tomorrow, called Vesna or Spring, into a memorial march for Boris Nemtsov and, it seems, permission has been given by the Mayor of Moscow. One can merely admire such courage and wish them well. At present I don't know whether there are any events in London in support of the Moscow march. As soon as I have any information I shall blog it and tweet it.

In the meantime, a representative of the Investigative Commission, Vladimir Markin, has announced that they will investigate the crime very seriously and are looking at several possibilities: an attempt at provocation to destabilize Russia (really, it is a shame from their point of view that Berezovsky is dead and people know it), a possible link with Islamist extremism (unexplained as Nemtsov had nothing to do with Chechnya but, unknown to anyone but the Russian security services he had received threats after Charlie Hebdo), and Ukrainian internal matters (it seems that on both sides of the conflict in eastern Ukraine there are loose canons who might assassinate Putin's opponents). There might also be other causes, said Mr Markin, to do with business matters (Nemtsov does not seem to have had any business interests) and private issues. So, there we have it. How many will be arrested?

In the meantime the police raided Mr Nemtsov's flat and took away documents, writings and the hard disk from his computer. One can only hope that there are copies on what he was working on in other places, preferably abroad, for his friends and colleagues say that he was researching details of Russian involvement in eastern Ukraine.

More as I find out.

UPDATE: There will be a memorial meeting in London tomorrow, March 1, at 2 pm outside the Russian Embassy in Bayswater Road. The organizers are asking people not to bring posters but only flowers, candles and, if they have any, portraits of Boris Nemtsov.
Posted by Helen at 11:58 AM