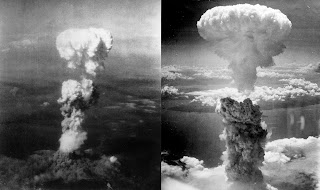 Seventy years ago the first atom bomb to be used in war was dropped on the  city of Hiroshima, the second one, on Nagasaki to follow two three days later. It undoubtedly ushered in a new world politically and militarily and has remained in many people's minds the pre-eminent example of a war crime. In fact, the casualties incurred by the firebombing of Tokyo were higher and when it came to war crimes, there were many competitors for the title of the worst.

The decision to drop the two atom bombs was taken by President Harry S Truman because he  considered, probably rightly, that the this was the only way to bring the war in the Pacific to an end speedily without further very high American and Japanese casualties. That alternative would have probably meant many more British, Australian, Indian and other casualties.
Posted by Helen at 3:33 PM