"Act for the Act"

A couple of days ago I was going either up or down some escalator in some central London tube station and noticed a series of new posters. They were not advertising shows in the West End (often ones that have closed as the TfL rarely bothers to keep the advertising up to date) or the nearest McDonald's or Garfunkel's or, even, the need to have various health checks. No, these were posters summoning us all to the battle to Act for the Act - to save the Human Rights Act. Each poster had some "poster child" of different genders, races and ages whose lives were made better by the HRA. The Act, we are told, was there for them; now the Act needs us.

This intrigued me. Naturally, I do not think there is anything wrong with political advertising and though I dislike the simplification practically ad absurdum of a complex issue as well as the clear lack of historical knowledge that is behind such a campaign, I do accept that this is going to happen.

One question we do need to ask, though: exactly who is funding this campaign. As ever, I asked Mr Google and this was the reply:

From the Equality and Diversity Forum I learned that Act for the Act is " a Crowdfunder project calling for donations to fund a nationwide poster blitz to save the Human Rights Act".


The campaign organisers want to create a poster campaign across the national transport network so that ordinary, real people, can tell their stories of how the Human Rights Act helped them to RIGHT a serious WRONG in their lives. For example, bereaved parents Matt and Martina Baines used the Act after their only child, 17 year old Kesia, died, to hold the authorities to account and win changes in the law; Jan Sutton was able to force her local authority to provide her with the care she needs. Rape victims failed by the police have used the Act to hold the police to account and protect others in future.

This campaign is supported by Equally Ours and is being organised by a group of people who have seen first-hand just how important the Human Rights Act can be. We have a Steering Group of 10 people working together.

One wonders what the alternative to "ordinary, real people is" - unusual or unreal people, perhaps, or Martians.

Before we go any further, let us have a look at Equally Ours. A Human Rights campaign, that is a campaign in favour of lots of human rights organizations, that is partnered by a number of quangos and are "hosted and led by the Equality and Diversity Forum, where we started.


The Equality and Diversity Forum (EDF) is a network of national organisations committed to equal opportunities, social justice, good community relations, respect for human rights and an end to discrimination based on age, disability, gender and gender identity, race, religion or belief, and sexual orientation.

A super quango that is a network of other quangos and whose aim is to generate as much work as possible through the human rights industry, as its Report and Financial Statement makes clear. The various grants are undoubtedly from the taxpayer through one or other layer of government and quango donors. It is no wonder that there is a little anxiety there that the HRA might be repealed or some new version of the old Bill of Rights substituted for it. Would that work as well as the HRA does for all these organizations?

Nevertheless, the poster campaign is supposed to be Crowdfunded or, in other words, it can happen only if people out there contribute various sums of money. That one cannot object to. If people are stupid enough to Crowdfund a political poster campaign, that is entirely their business; taxpayers' money wasted on a pretend information campaign would be quite different.

So here we are: ActForTheAct, a Community Crowdfunding Project. 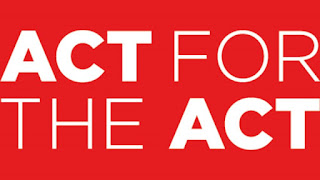 The project, we were told, could not do anything unless £50,000 was pledged by June 12, 2015. It was, in fact, overfunded with £55,870 pledged by the date specified and by now they, presumably, honoured their pledges and the campaign has gone live, which is why the posters in question have appeared in Underground stations.

Curiously enough, an earlier version of the news about the funding had a link to a list of those who pledged money or, at least some of them and certainly not the one who pledged £10,000 or the four who pledged £5,000. As far as I can see, the link has disappeared.

The actual website tells us little more than the previous Crowdfunding ones did with the various cases quoted without any detail but, presumably, if anybody asked those would be provided. Wouldn't they? And I don't mean just the actual "poster child's" story. Why the HRA was needed to help someone who quite illegally was not looked after properly by her carers or to show the police that it was wrong to hold a child for 11 hours without any access by a qualified adult remains unclear but one can hardly argue against that. Nor can one argue against voluntary donations or time given free because people believe in something.

My own suspicion that it will not be long before the likes of Amnesty, an NGO as well as a quango, become donors and participants in the campaign. At the very least they will start using it for their own purposes. In fact, their campaign has started already though the Amnesty name is in small letters at the bottom of the page. We must all look for those small letter at the bottom of the page in various supposedly charitable but actually political campaigns whether they are to save the HRA or affirm the UK's membership of the European Union.
Posted by Helen at 4:42 PM