Another loss to the Brexit movement 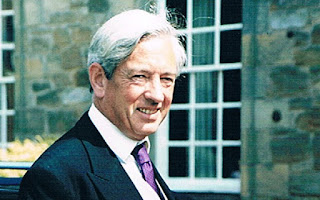 A friend called my attention to this obituary in the Daily Telegraph telling me about the death of Ronald Stewart-Brown, which I knew nothing about. As one is at times like that, I was shocked, having seen Ronald at one of the many Brexit meetings and discussions a few months previously. He did not look well but I had no idea just how unwell he was.

There can be few people in eurosceptic circles who did not know or had not seen Ronald Stewart-Brown at various meetings. A tall man with a forward leaning loping walk he had a ready smile, usually accompanied with a nod for all those many people he actually knew and any amount of time to discuss matters to do with the EU and, particularly, trade and what Britain's future might be if we come out.

One of my early meetings with Ronald was when I was working at the European Foundation. We had met and chatted before and one day he suggested lunch, mainly to discuss what his role might be in the eurosceptic fight. I don't think we came to any conclusion at the time but we resumed discussions in person and over the telephone on a number of occasions. Eventually, Ronald did find the right niche for himself: he set up the Trade Policy Research Centre and concentrated through research, published papers and discussions on building up a credible policy of an alternative trading network to EU membership. Inevitably, his ideas brought him into conflict with other people whose own ideas were just as strongly held if not always based on quite as much research. Ronald argued his case courteously but vehemently: his manners remained excellent but he would not be shifted from what he considered to be the right analysis. At the same time he was ready to listen to other people's opinions and there were times when I was embarrassed by his insistence on wanting to know what I thought on certain subjects.

At our last meeting we chatted as always and I expressed a certain amount of boredom with the whole subject of the EU. Having been involved in the debates for so long I did not think I could work up any enthusiasm now, though the situation was becoming critical. Ronald's response was characteristically complimentary and robust. First of all, he did not think that this was the time to give up or succumb to ennui. Of course, he added with a smile, you were so far ahead of us all those years ago, most of us are only just catching up. He intended to go on working and fighting as long as it was necessary and urged me to do the same. Alas, his time was considerably shorter than I realized.

We shall all miss his incisive and knowledgeable contribution to the coming debates.