Books I have been reading: Luke Harding - A Very Expensive Poison

Probably I ought to be writing about the extraordinary fracas created by the Times and its hackette, Rachel Sylvester, around the Conservative Party leadership race and I shall do so tomorrow, by which time perhaps the newspaper will produce the full tapes of the interview with Andrea Leadsom, settling to some extent the row. As things stand the newspaper cannot be seen to have behaved honestly or honourably but that does not surprise those of us who have viewed the Times for some time as nothing better than a rag with delusions of grandeur. 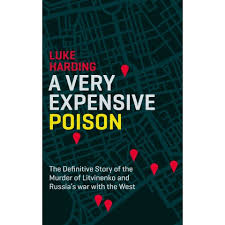 Until then, let us turn to other, equally important matters. I have already written about the launch of Luke Harding's book about the Litvinenko affair, A Very Expensive Poison but since then I have also read the book and it is, in my opinion, of great importance and interest. It describes the crime in detail, the various events surrounding it, in Britain, Russia and Ukraine and also the Inquiry and Sir Robert Owen's astonishing report. The book is undoubtedly a page-turner. How could it be otherwise, given its subject, but not everyone could have done as much justice to it as Luke Harding.

At times the language gets a little too journalistic and too Guardian-like. For instance one cannot help wondering what Mr Harding's experience of judges might have been if he thinks that a retired one like Sir Robert Owen being fair and open-minded as well as dryly witty somehow makes him "cool". Actually, it makes him normal as judges go. At other times I thought that the author (who is, in fact, a good friend) had spent a little too much time with Russians and in the process lost a good many definite and indefinite articles. But these are really minor cavils and make one smile while reading a story that is sad, depressing but also, at times, uproariously funny. The account of those two hapless assassins, Andrei Lugovoi, now important politician and recipient of a state honour for services to the fatherland, second class (would he have received first class if he had not been quite so inept?) and Dmitry Kovtun, of whose subsequent career far less is known, wandering round London, trying to find an opportunity to feed Polonium 210 to their victim, failing, flushing it down the toilet and then coming back to try again is richly and blackly comic. As Luke Harding says, Russia does produce the best news stories.

There are many things the reader can find out: Alexander Litvinenko's attempts to introduce some kind of honesty into the FSB, President Putin's enmity towards him precisely because of that, his relationship with Boris Berezovsky (also dead in mysterious circumstances); Putin's probably links (well, almost certain) to criminal gangs, the FSB's absolutely certain links to those gangs; the careers (if one can call it that) of the two assassins and, most interestingly, the various meeting places for agents, both British and Russian. There are hilariously funny descriptions of Lugovoy's and Kovtun's various visits to London and their hopeless attempts to pass as ordinary businessmen (a police constable at Heathrow picked them out on sight as suspicious individuals) and their equally hilarious attempts to find some entertainment. There is a wonderful description of a particular dodgy nightclub in St James's, called Hey Jo's, visited by the two Russians during one of their unsuccessful trips to London. Low levels of radiation were found in various places but not on the floor or the large phallus at the entrance.

Hey Jo's was linked to a restaurant called Abracadabra, which served Russian food in the most outrageously and hideously glitzy surroundings. Neither place exists any longer since the owner, former Essex fruit and veg stall owner, Dave West, was knifed by his son some time last year. The son is serving a sentence of 16 years for manslaughter.

The book places the grim tale in an international background. There are excellent, pithy accounts of the growth of the Russian mafia state, the invasion of Ukraine, the shooting down of MH17 and of the murder of Boris Nemtsov. In fact, everything you ever wanted to know about Putin's Russia but were too frightened to ask is here.

All of that is fascinating but the best part remains the account, suitably tense as if this were a thriller, of Sir Robert Owen's inquiry, the evidence that came out during it and, finally, the report, which firmly accused Lugovoi and Kovtun and equally firmly pointed an accusing finger at President Putin, a man described by people as a gangster masquerading as a statesman.

So far so good. But what is the British government going to do about it, given that we have never managed to produce a Magnitsky List? Well, not a lot. Home Secretary and Prime Ministerial hopeful Theresa May, who had stood firm against any kind of inquiry until the shooting down of MH17, something that even she could not ignore, has also made it clear that nothing much was going to be done. We were not even going to issue a Litvinenko List as that might upset some highly placed Russians, specifically the President. One cannot see her changing her mind if she becomes Prime Minister.

So, knowing that a British citizen was murdered on British soil by foreign agents on the orders of a foreign leader, we can rest assured that .... we shall keep quiet about that and about other suspicious deaths. Not quite, of course. Marina Litvinenko has not kept quiet and has finally achieved that inquiry and the report she wanted to read; Scotland Yard may have kept quiet but behind that quietness worked hard to collect evidence and witnesses; Sir Robert Owen did not keep quiet but produced a bombshell of a report that was carefully argued on the basis of evidence; above all, Luke Harding has not kept quiet and for that we must be very grateful. This book should be read by anyone who attempts to make statements about Russia.
Posted by Helen at 12:21 AM