Tuesday Night Bloggers: The Norths face poisoners and the cases are screwy 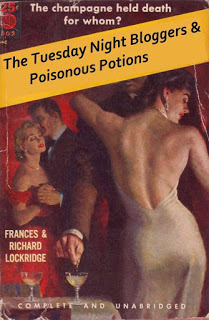 The Norths are screwy. Everyone knows this though they are not aware of that. Their friend, Lieutenant (sometimes acting Captain) Bill Weigand knows they are screwy. Sergeant Mullins not only knows but says so. Frequently. And Bill always replies with one word: "Right". Dorian Weigand, the artist, knows they are screwy. She knows that going away with Pamela on one of her wild goose chases is likely to be dangerous but she always goes. Once she takes an automatic with her. Her husband, Bill, had insisted she acquired a small automatic and took it with her whenever she went off with Pam North on one of those wild goose chases, just in case they end up in trouble. Deep trouble. They do end up in trouble. Deep trouble. The automatic is taken away from Dorian by a man who has already killed two people and who turns out to be a spy as well.

Inspector Artemus O'Malley knows they are screwy and every case they are involved in will turn into a screwy one even if it does not start out that way. The Inspector (Artie) does not want the Norths in any case. He likes quick, easy solutions. Somehow, he never gets them and the Norths are always in Bill Weigand's cases. You'd think Lower West or (sometimes) Lower East in Manhattan would have crimes that did not affect the Norths in any way but they do not. The Norths are always there and if they are there they will get involved. 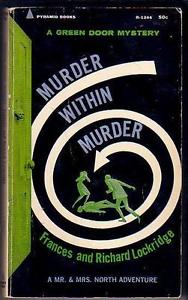 Take these three poisoning stories, one, Murder Within Murder, immediately after the war, one, Murder Comes First, in 1951, during the atomic espionage crises, and one, Death of an Angel, in 1956, with life back to normal. Whatever normal might be.

In the first one, the victim, Miss Gipson, has been employed as a researcher by Jerry North's firm, North Books Inc. Miss Gipson is poisoned by sodium fluoride, which has been substituted in one of the capsules of her normal digestive powders. The description of Miss Gipson's last meal in a tea shop explains the need for those digestive powders. Naturally, Bill Weigand has to call Jerry and Jerry has to go along to identify Miss Gipson and Pam goes with him. Then she has ideas. Naturally.

In the second one the poison is cyanide and it has been put into one of Grace Logan's vitamin capsules, thus turning it from "concentrated health" into concentrated death. Pam North's aunts happen to be present and one of them is a possible suspect. Naturally, they rush to the scene and become heavily involved in trying to rescue Aunt Thelma though later on it is Aunt Lucinda who needs rescuing. Well, Pam becomes heavily involved and drags Dorian Weigand with her.

In the third one their involvement is a little less direct. On Thursday there is a party to celebrate a significant milestone in the run of the play written by one of Jerry North's authors. At Bradley Fitch's spectacular apartment. On Friday, Fitch has another party, a stag party, because in the meantime he has become engaged to the star of the play. On Saturday morning Brad Fitch has a monumental hangover. He is given a monumental hangover cure in a glass together with oxalic acid in it. Not only had the Norths seen him at the first party and knew many of the suspects, one of their cocktail napkins is found in the room Fitch died. Naturally, Bill Weigand has to talk to them and they become involved. Naturally.

Jerry North is less screwy than Pam. After all, he runs a successful publishing business. Judging by the amount of money they must spend on eating and drinking in very expensive restaurants and bars, on taxis and on Pam's outfits, the publishing firm must be very successful, indeed.

Pam North is very screwy. Everybody thinks so. At first people find her way of talking - short sentences with no apparent connection between them and ideas leaping like a salmon - quite hard. Then they get used to it and seem to like it. Except Inspector O'Malley. He never gets used to it. He never learns to like it. Or them.

Pam's whole family is like that. They all leap from subject to subject and make connections that nobody else can see. Her nieces are like that but need to practise a bit. Her aunts are so good at it that they flummox even Pam. Sometimes those leaps go towards solving the murder. Sometimes they just go off into the distance. In Death of an Angel she gets it completely wrong. In Murder Comes First she works it out correctly and the reader is even given the clue that sets her on the right path.In Murder Within Murder she gets it generally right, as she says, and goes to the right family. Otherwise she is wrong.

Often she rushes off to confront a murderer, sometimes not realizing that it is the murderer she is confronting. Then she has to be rescued by Bill Weigand and Jerry North. She promises not to do anything stupid again. Right, they all say. They know that Pam will do it again and there will be many more screwy Mr and Mrs North adventures.