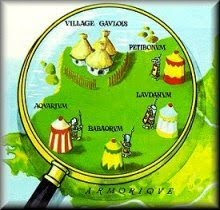 A reader of this blog has pointed out that not all the bits of the post-Lisbon EU are in place. There are the Aaland Islands, Swedish speaking but part of Finland. Their regional parliament has not yet accepted the treaty as it applies to them.

It was not easy to find information on the subject in English but eventually I lit on this somewhat peculiar blog. Granhnlaw says that it is about

The Treaty of Lisbon and EU Law for businesses and individuals. EU politics for the democratic European Union 2.0: the Federal Republic of Europe (or the United States of Europe). By Ralf Grahn.

Anything that talks about the democratic European Union is always a joy to read. Ralf Grahn also urges people to discuss "our common European future". Not sure how many have taken this suggestion up but I am always happy to do so. My idea of a common European future might be somewhat different from Mr Grahn's.

However, he does write about the situation in the Aaland Islands and is suitably annoyed by the uppitiness of the inhabitants. How dare they stand in the way of the common European future? How dare they demand various rights for themselves? Well, maybe there is something in history that urges them to be bloody-minded.

So the situation, as Mr Grahn says on the basis of Swedish language websites is as follows:

On 16 November 2009 the Åland Parliament plenary has tabled the report for debate on 23 November.

The Lisbon Treaty enters into force on 1 December 2009, and it was written on the assumption that it applies to the whole territory of Finland, including the Åland Islands (according to the exemptions contained in the Åland Protocol).

I very much fear that horrid hectoring bullies of the Ralf Grahn variety will triumph and the defiant Islands will sign up. But I cannot help wishing that they would imitate that little village in Gaul that refused to be conquered by the Romans or to be divided into three parts.
Posted by Helen at 12:43 AM