Still under the influence

Earlier this evening I went to the launch of a book about a great but hardly known Russian art critic, Nikolay Punin at the Pushkin House (where I, too, shall be giving a talk next week but that's another story) and organized by the UK Friends of the Hermitage.

The author, Natalia Murray, who lectures on twentieth century Russian art at the Courtauld, called her book The Unsung Hero of the Avant-Garde, which gives a slightly one-sided view of Punin's life and work. He started off as a member of the Avant-Garde and a Futurist, an art Commissar, in fact, who, while fighting for the Hermitage during the Civil War, also proclaimed loudly the need for proletarian art, for the old to be swept away, for a new art in a new state.

Over the subsequent decades he moved over a little and got into serious trouble with the authorities for his insistence that Western art was of great value and modern Western art needed to be seen and studied, not hidden away and lambasted as something decadent. There was and is a superb collection of late nineteenth and early twentieth century art in Russia, put together by the collectors and businessmen Mamontov and Schchukin but expropriated by the Bolsheviks. There are also wonderful examples of early twentieth century Russian art, which was truly avant-garde, in the forefront of many developments but was suppressed (with artists exiled, silenced, imprisoned and murdered). Punin is also credited with saving much of the "decadent" art that was very nearly destroyed.

His reward: three arrests one in 1921 together with the poet Nikolay Gumilyov who was executed, one in 1935 when he was released after pleas by Anna Akhmatova (whose son had also been arrested) and Boris Pasternak and the final one in 1949 and a miserable and tormented death in the harsh labour camp in Vorkuta in August 1953. His name was written out of Russian art history, to be revived only partially and reluctantly very recently when his diaries were published in Russian and English by the University of Texas that has acquired some of them.

Dr Murray's biography is the first one in any language. (The picture is on the cover of the book and is a portrait of Punin by Kazimir Malevich.) 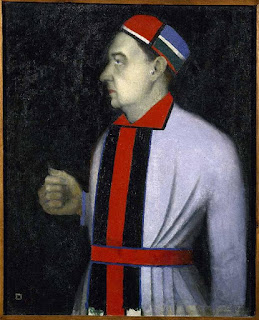 During the discussion it came out that despite the inherent importance of the theme, despite Dr Murray's study of Punin's personal archive that is mostly in the keeping of his grand-daughter, there was a reluctance on the part of the publishers to take the project on. Eventually, it was published by a Dutch company, Brill, who also has an extensive English list.

The reason for interest being so low, it seems, is that after the Soviet authorities had written him out of the story, nobody in the West knew or cared about him either. When it comes to our knowledge of Russian history and culture we, in the West, are, to our shame, still under the influence of Soviet decisions.

After all, as I wrote about an exhibition of Russian and French art in Russia back in 2008, the curators at the Royal Academy, largely ignored Nikolay Punin's role in saving many of those paintings and his fate as one of Stalin's victims.
Posted by Helen at 11:05 PM