Private Eye gives us those UKIP policies in full 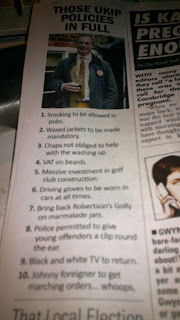 UKIP is not a liberal/libertarian party and not a particularly authoritarian; it has stopped talking about the EU and has been talking about being the other lot, not the three main ones, representing ordinary people. All piffle. What they really want is a kind of rose-coloured version of the 1950s as it never existed.

The reality was rather grim with rationing in place for the first half of the decade and large numbers emigrating to Australia, New Zealand and Canada. I suppose narrowness of outlook can seem to be security and happiness as viewed from a distance.

There is also the problem that the fifties ended with an economy that stopped functioning, a growing national debt, an ever more powerful grip on the country by the unions and ... yes, the sixties. But this time, they will get it right and the new and more glorious 1950s will turn into a kind of Brigadoon.

Anyway, here are those policies in full, as published by Private Eye:

8.      Police permitted to give young offenders a clip round the ear.

You think this is not right? Then you have not been paying attention.
Posted by Helen at 12:05 AM