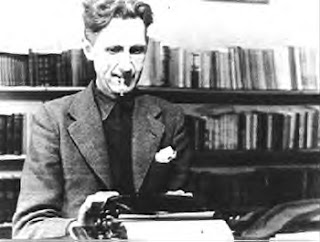 I tend to save anniversaries for another blog but there are two today that are important to the way we see the world and they have to be mentioned.

It is 110 years since the birth of George Orwell, the man who defined much of our modern political thinking (what had been left undefined by Dostoyevsky) and whose ability to grasp political reality despite his left-wing socialist outlook, remains unrivalled. Happy Birthday Eric Blair/George Orwell.

It is 63 years since North Korea invaded South Korea, thus pushing into the open what had been in the shadows: the new world division after 1945 between the West and Communism. The invasion would not have happened if Stalin did not feel reasonably secure because extensive Soviet espionage had given him an ability to rival the United States in the nuclear race; and the war might not have happened if the Soviet Union had not, temporarily, vacated its seat in the UN Security Council, thus allowing that organization to take the one and only sensible decision in its entire history.
Posted by Helen at 2:25 PM