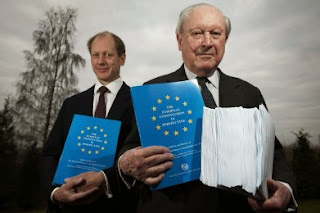 Though my last posting was largely a dissection of the noble Lord Leach and his pretensions, so avidly backed by the Evening Standard, to being the leader of the more intellectual branch of the eurosceptic movement, it also referred briefly to the man who has been described as the unsung hero of it, Brigadier Anthony Cowgill MBE.

All of us who knew Tony Cowgill, his indefatigable work, his determined stubbornness to get the at the truth and to overcome the "gobbledegook" presented by the EU and its various supporters and, above all, his unfailing charm and courtesy miss him a great deal. The cause misses him.

His work on the EU started in 1992 when he had reached an age at which most people would consider retiring and taking things easy. Not Tony. He and his son Andrew laboured mightily to produce annotated versions of the various treaties, whether the government wanted us to read the text and understand it or not (mostly not). I am very proud to say that in the days when texts were not available on the internet but only in hard copy I was instrumental on several occasions in getting those pages to Tony and his son Andrew as soon as possible from the Parliamentary offices.

Discussing Tony Cowgill with a friend yesterday I was reminded of his role in creating a business organization that opposed Britain's entry into the euro. This is what said friend, a journalist (hint: he has a regular column in the Sunday Telegraph) wrote:


The Brigadier had been after the CBI for some time over its bogus polls trying to show that "business" was generally in favour of the EU, although when you looked at the small print the polls showed very serious and growing dissatisfaction with the workings of the single market, over-regulation etc. Then they trumpeted that the biggest yet poll was to be carried out by Bob Worcester and MORI with special reference to Britain joining the euro. Tony had one of his fatherly talks with Worcester and pointed out that it would do his professional standing no good if he gave his name and prestige to a much-publicised poll that would, on the CBI's track record, be presented as no more than a shameless propaganda exercise. Shortly afterwards, Worcester told Tony that he had withdrawn from his arrangement with the CBI (as was publicised by certain malicious journalists at the time, well one of them at least), and the much-vaunted poll was never carried out.

At the same time, Tony had ensured that his reporting on the CBI's chicanery with its polls was passed on to various key CBI members, including Stanley Kalms (now Lord Kalms)and also a regional branch which made a big stink about what head office was up to. The result of all this was that a number of concerned senior members, including Kalms and Leach set up Business for Sterling, which did play a significant part in showing that there was great unhappiness about the euro in big business circles but the groundwork had been laid by the great scare over Goldsmith's Referendum Party - which prodded all three main parties into pledging before the 1997 election that Britain should only be allowed to join if this was put to a referendum first.

And that, ladies and gentlemen, is how it all began. It is up to us to ensure that the Brigadier's name lives on and his achievements are not forgotten.
Posted by Helen at 12:52 AM