Are they deliberately destroying the country?

Anyone who gives it any thought knows that the amount of damage a government can do outweighs the amount of good by a factor of about a thousand. However, it is rare for a government to try to destroy the country it is supposed to be in charge of deliberately. Usually the outcome is more of unintended consequences or lack of understanding. However, as one looks at the government of Vlad and his Chekists one has to come to the conclusion that they actually want to destroy a potentially very great country.

We all know that the money that poured into the country while oil and gas prices were high was largely stolen by Putin's very own oligarchs, the ones who did not speak against him and made deals whenever he or his minions wanted it. We know that the country's economy is doing very badly and it is not the Western sanctions that are the biggest problem. We know that the war in the Caucasus and now in eastern Ukraine are drains of money, resources and human lives with no real gain in sight unless one considers the growing vicious and obscurantist nationalism a gain. (Few people of any intelligence do and, I suspect, most Russians simply ignore the blather that pours out of the state controlled media.)

This story, however, shows that the Cheka state is determined to destroy the country's future as well as its present.


One of Russia’s largest scientific benefactors has cancelled millions of dollars in funding after the government branded his foundation a “foreign agent”, a label used to target organisations seen as hostile to the state.

The move to alienate 82-year-old Dmitry Zimin has stirred Russia’s scientific community, which has watched with despair as mismanagement, dwindling budgets and a “brain drain” have eroded their capabilities.

The move follows a dismal month for scientists, as dozens of universities and institutes lost access to online journals after the government failed to pay nearly $1m in overdue subscription fees, and a botched satellite launch became the country’s 16th failed lift-off in six years.

While the Russian government has ordered deep cuts in its space and hi-tech programmes, Zimin’s Dynasty Foundation had just raised its annual budget to $8.6m to be allocated to research stipends, publishing, and outreach.

So, we have a situation in which universities and institutes, which are funded by the government are losing access to vitally important online journals because their funder has failed to pay a sum that would not buy one day in the life of the average oligarch and the private Foundation that is prepared to do the funding is being hounded out of the country.

There is no point in showing pictures of Yury Gagarin as the Guardian article does - Soviet science, despite its initial victory in the space race was not that brilliant but considerably better than the what we have now. Indeed, we have a government that in the name of some perverse "patriotism" is prepared to destroy the country's science and technology, its future.


Since its founding in 2002, the Dynasty Foundation has been praised by Moscow for both its generosity and its strictly non-political work. In February, Zimin became the first-ever recipient of a “loyalty to science” state award, presented by Russia’s minister of education and science, Dmitry Livanov.

The justice ministry initially explained its decision to add Dynasty to the “foreign agents” list by saying the foundation was engaged in political activity and technically received money from abroad, as Zimin holds overseas accounts.

The ministry then broadened its explanation to blame Dynasty’s funding of Liberal Mission, an organisation run by former economy minister Yevgeny Yasin which aims to spread liberal values in Russia.

Supporters say the attack on Zimin just months after his award is both self-defeating and a sign of government disarray.

Zimin, speaking ahead of the move, suggested that the Kremlin’s extreme pro-nationalist rhetoric had created a chilly climate for philanthropists who, by nature, serve as a reminder that Russia still has room to improve.

"Not invented here so we don't like it" is not exactly unknown in other countries (think of our ridiculous discussions about the NHS) but this is carrying that idea to a point of complete lunacy. How is it justified?


Dynasty’s blacklisting has been met with a heated response from Russia’s scientific community.

More than 3,000 researchers, writers, publishers, and students have signed an open letter calling on the justice ministry to reverse the decision, which they called “not an ordinary example of mindless bureaucratic zeal but a direct blow to the pride, prestige, fame, and future of the country”.

Scientists have also called for a rally to be held in Moscow on 6 June in support of Dynasty, and Russian science generally. “We can’t sit idly by and watch as the government destroys one of the best charitable funds,” the rally’s organisers wrote on Facebook. “We can’t accept the fact that the government sees teachers, scientists, and patrons as enemies.”

In the wake of the academic backlash, some state-backed media have sought to embellish the claims about Dynasty’s political agenda. An NTV news report broadcast on 31 May cited “suspicions” that Zimin’s son, Boris, was secretly funding opposition activist Aleksei Navalny and independent channel Dozhd TV.

So the philanthropist's son is suspected though not proved to be funding a media outlet that is completely legal and, possibly an opposition activist who is mostly allowed to get on with things as the state has no idea what to do about him. That, of course, is an excellent reason for closing off funds to scientific publications, conferences and various other events, particularly when, let us remember, the government is not paying for any of it either.

About three and a half thousand people came out in Moscow to demonstrate against this anti-scientific, anti-educational obscurantism. Not bad on an issue that is not, perhaps, all that clearly known and understood, at a time when most Moscovites spend their week-ends in their gardens dealing with fruit and vegetables.

Dozhd has pictures of which I am reproducing two. The slogan in the first one is well known and, for once, apposite: "War is Peace. Freedom is Slavery. Ignorance is Strength." The second one says: "If you bury science, you bury the country." 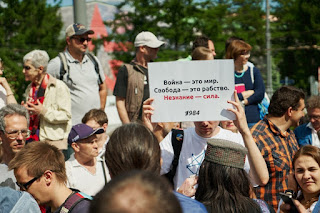 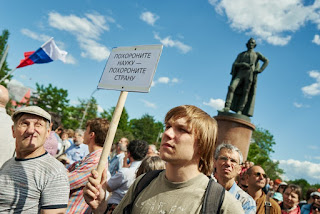