This is getting out of hand

Your Freedom and Ours is what this blog is called and that is what it is. I am getting a little perturbed by the news that is coming over from the other side of the Pond where there is now war of cultural and historical vandalism going on in the wake of the tragedy in Charleston, South Carolina.

There is no need to rehearse what happened, which was terrible, or the dignified response of the city to the tragedy that struck them. Nor is there any need to go through the various articles, essays and analyses (the books are to come) that have followed the shooting. For one thing I have no space for all the links and for another anyone who is interested would have read a great deal and will probably do so in the coming days, weeks, months but not years because something else will happen to take people's attention away.

What caught my interest, inevitably, is the campaign against the Confederate Flag, which is now being taken off not just public buildings but private merchandise. In fact, it will soon be banned completely and not for the first time in American history. It came back last time and it will come back again but, in the meantime, a good deal of historical knowledge and understanding will be destroyed in the name of some spurious feeling of justice. The truth is that the events that led up to the Civil War or the War Between The States or the War For The Union, the actual war and the years after it are far too complicated to be reduced to this sort of simplistic rubbish. (Though I am rather enjoying the reminders that the Confederate Flag was the flag of the Democrat Party. Of course, it was. Don't believe me? Look it up, while you can.)

I hear stories of Civil War memorials being defaced with stupid slogans and suggestions that Confederate generals should be dug up (what's left of them) and put on trial or their bones thrown to the dogs or whatever. This is insane. All of it.

The killer of Charleston did not carry out his attack because of the Confederate Flag or the presence of Civil War memorials. And, let's face it, even on this side of the Pond we know that the greatest number of black lives wasted in many American cities are in gang fights and criminal attacks carried out by other black young men. The situation is appalling and something ought to be done because black lives do matter but not only when the killer is white.

The worst suggestion I have seen is that Gone With The Wind should now be "retired". Well, good luck with that - "retiring" one of the most popular films of all times is not going to be easy, not even for leftist, progressive journalists. I hope nobody is thinking of retiring Birth of a Nation, which I am due to see at the NFT on Sunday. I notice that there are several comments on the NY Post article that I have linked to, which compare this attitude to the destruction of historic and cultural sites by IS because they do not like the religion or ideology that motivated their building. Well, I cannot disagree too much.

Incidentally and completely off the topic, here is a conundrum: why is it that the best and most highly regarded films about the Civil War, Birth of a Nation, The General and Gone With The Wind are all from the point of view of the South? There have been films from the point of view of the North, not least several biopics of Abraham Lincoln (no, dear, he was not a Democrat either, but a Republican) but nothing of that calibre. Is it because like the Royalists, according to 1066 And All That, the Confederates were Wrong but Wromantic?

So, just because I hate what is happening I have decided to post two pictures: one of the Confederate Flag as it used to fly together with the Stars and Stripes and a photo of General Robert E. Lee, the man who not only fought in that War but, when that became hopeless, surrendered, refused to institute a guerrilla war and worked for the reconstruction of the shattered union. 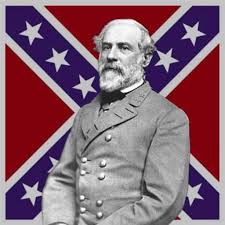