Well, yes, it is once again Wednesday as Tuesday evening went into discussions, dinner and .... well, more discussions. Still, the blog is happening.

Unlike Christie, Marsh did not seem to have any real interest in matters beyond the body. She could not, for instance, have written anything like the strange but weirdly attractive series of stories about Mr Harley Quin. Neither did she seem particularly interested in matters of religion. Or so it would appear. Peering into the novels one sees a slightly more complicated picture. 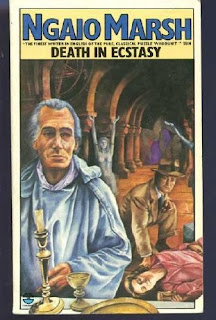 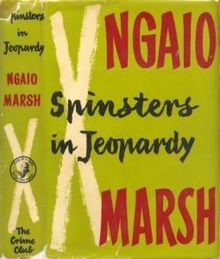 Occult, as such, is important in three novels, two about somewhat dotty but also very sinister cults, Death in Ecstasy and Spinsters in Jeopardy, and one in which some quite revolting activity grows out of one character's obsession with it, Surfeit of Lampreys.

Marsh, unlike, say, Margaret Millar in How Like An Angel, shows little interest in understanding those who join the two cults though she does have some sympathy for young people who, for whatever reason, have no moral compass to guide them through life and for older lonely ones who are easily exploited by fraudsters and drug dealers. Miss Wade's desolation when the House of the Sacred Flame is closed down and Father Garnette arrested together with the real crook and murderer at the end of Death in Ecstasy is pitiful; similar desolation shown by P. E. Garbel at the end of Spinsters in Jeopardy is more dignified and tragic as well as more hopeful for the future.

In parenthesis one may note that the first of those novels has one of the nastiest pictures of a homosexual couple in Marsh's novels and they are all quite unpleasant. There is a strong implication that the viciousness of homosexuality in young men is not far off the viciousness of people who run such cults for their own nefarious purposes. The second novel describes a somewhat nastier set-up, partly because it is an important link in international drug trading, which becomes Alleyn's preoccupation in the post-war novels, and partly because the real villain (the book is a thriller rather than a detective story so there are no spoilers here) is a revolting and vicious Egyptian who is also, curiously, a very skilled surgeon. Marsh, who wrote sympathetically about Maoris, Africans and a black British doctor in Clutch of Constables, was, for come reason, venomous about Dr Ali Baradi and his servant Mahomet, using every racial cliche she could think of.

So, there is occult to be used in a ridiculous and vicious way for the fleecing and exploiting of vulnerable people, for criminal money making and, in the last resort, for murder. Then there is the occult as practised by the mad and weird Marchioness of Wutherwood and Rune (Aunt V.) in Surfeit of Lampreys. Her behaviour before and, especially, after her husband's murder is so horrible and the rites she carries out are so utterly disgusting that even the hardened nurse faints and the police officers feel a bit queasy. (I shall spare the readers of this blog.)

Here I must pause to wonder about the Ingoldsby Legends, a collection of gruesome and terrifying tales that, as far as one can make it out from Marsh's, Sayers's and other authors' novels, was routinely handed to children to read. How many of them were terrified, given nightmares and traumatized for life by some of those "legends"? How long did this strange educational habit that came close to child abuse continue? There might be a subject for an academic thesis here. 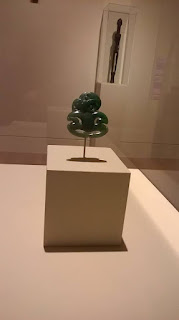 So, Marsh has nothing but disdain for the occult and other-worldly? Not entirely. She shows a great deal of sympathy for Maoris insisting on or returning to their traditional faith and its symbols, whether it is Dr Te Pokiha who explains in Vintage Murder that he can never view the little green jade tiki  as white people do, Rua Te Kahu becoming incensed at the theft of the tapu adze in Colour Scheme or the young actor Rangi who explains in Light Thickens that the theatre and the actors are all tapu until the murder is solved, Marsh displays great sympathy for Maoris who, under pressure, abandon their Western ideas and revert to Maori thinking, illogical and wrong though it seems to most Europeans.

Of course, Maori religion and fetishism is coherent where the occult sects in the two novels use a mish-mash of many religions and mythologies. Also, Marsh may well have felt that respect is due to the Maoris not least because of the way they had been treated in the past. But one cannot help seeing a certain amount of patronizing head-patting in her obvious dislike of anyone who makes a less than complimentary comment about the tiki or the adze or the concept of tapu.

Although she has little time for the occult sects and the mad, haphazard study of it but she does often display sympathy for experience that cannot be described as entirely physical and some forms of belief that go beyond that. Alleyn frequently expresses to himself a slight disdain for religion and in Spinsters in Jeopardy he lumps the obscene and ridiculous mix of many myths and religions  in the House of the Silver Goat together with the far more orthodox beliefs and practices of the devoutly Catholic Raoul and Theresa. The reason he meditates on this subject is because he experiences something that is repeated in several novels: a sensation of stepping outside his body and watching himself from afar, something that can be described as a separation of body and spirit. There is no explanation for this phenomenon but it happens several times and is not dissimilar to Troy's feeling that her work takes on a life of its own and she merely follows it and her genius in producing her paintings. Time and again she steps back after barely existing on a physical level and marvels at what had been produced, apparently outside her control. 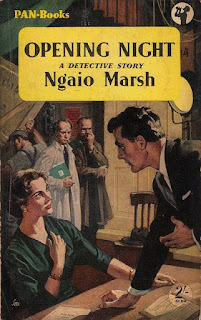 Actors in Marsh's novels go through similar experiences. There is a wonderful description of the duality an actor feels when getting into a part - being oneself and the other person, while stepping outside one's body - in Opening Night. We know the New Zealander Martyn Tarne is a good actress because she goes through this experience while the girl she eventually replaces, Gay Gainsford, is not because she does not seem to. But, as we find out, in Death at the Dolphin, it is perfectly possible to be good at acting as a craft without that sort of experience. The Dark Lady is played without much understanding  apart from the fact that the character "sends" Will Shakespeare.

If one takes the notion of creativity as stepping outside oneself, of separating body and spirit then the idea of certain tools of the trade taking on a life of their own becomes credible. Troy's pencils and brushes, the ghastly and murderous Garcia's clay in Artists in Crime, all acquire a life of their own. The most terrifying example of that comes in the last novel, Light Thickens, which, being about a production of Macbeth, deals with magic and witchcraft. The murderer is not hard to work out and much of the interest of the book comes from the descriptions of the theatre and of the production as well as the magical, in various senses of the word, elements. Part of the production is an attempt to have as many of the real weapons as props and the murder is committed by a very special axe, a claidheamh-mor, a deadly weapon that had been used for murder before. It has special properties, insists the murderer, and those who wield it are merely its "demented agents". The possibility of the claidheamh-mor having some special qualities remains with the investigators and the audience though Alleyn refuses to accept it. The murderer, he rightly insists, knew what he was doing.
Posted by Helen at 6:43 PM