Rejoice but do not forget 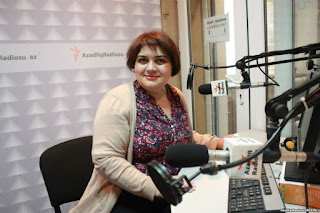 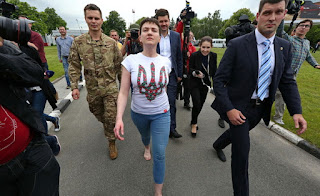 Two good news items today: the release of Nadiya Savchenko and of the investigative Azerbaijani journalist Khadija Ismajilova. Of the two, oddly enough, straightforward rejoicing is in order more with the latter.

Khadija Ismayilova was released on probation by the Supreme Court of Azerbaijan on appeal after a world-wide campaign. (An addition source of satisfaction is that this was not achieved by the egregious Amal Clooney who was taking the case to the ECHR.)


Ismayilova, who had delved into the wealth of the country’s first family, was arrested in December 2014 and sentenced to seven-and-a-half years in jail in September last year.

The supreme court ruled on Wednesday that her sentence would be changed to a three-and-a-half-year suspended term. A group of wellwishers gathered outside the court with balloons to celebrate the verdict, which has come two days before Ismayilova’s 40th birthday. She is expected to leave detention later in the day.

Her trial, on charges of tax evasion and embezzlement, was widely seen as politically motivated, and revenge for her award-winning reporting. In her work for Radio Free Europe/Radio Liberty (RFE/RL), she carried out a number of investigations that linked president Ilham Aliyev and his family to alleged corruption scandals.

At the same time as Ismayilova’s arrest, Azerbaijan’s authorities also raided RFE/RL’s Baku bureau and sealed it shut. The oil-rich country is run by Aliyev, who took over when his father died in 2003, and little dissent is tolerated. A number of other rights activists, journalists and lawyers have been imprisoned in the country on charges widely decried as politicised, though a group of them were released earlier this year.

Either the Supreme Court in Azerbaijan is more independent than any of us had believed or, much more likely, the Aliyev family is relatively sensitive to Western reactions and attitudes.

One cannot say the same about Vlad and his Chekists who are about as sensitive as a rhinoceros is to tickling (don't try it at home).

Nadiya Savchenko, Russia's most famous hostage, as RFE/RL says, was also released today, having been pardoned by President Putin after fairly long imprisonment, stretches of hunger strike, a show trial overwhelming in its ludicrousness and a twenty-two year sentence. She is not simply being released, though, but exchanged for two Russians, Yevgeny Yerofeyev and Alexander Alexandrov, who had been described during their trial in Ukraine as being


elite members of Russian military intelligence - but Russia insisted they were not on active duty when they were captured in eastern Ukraine.

They were sentenced to 14 years in jail last month after being found guilty of waging an "aggressive war" against Ukraine, committing a terrorist act and using weapons to provoke an armed conflict.

They, too, have been pardoned by President Poroshenko.

So Savchenko's release is a little more complicated than Ismayilova's conditional one. As Brian Whitmore says on The Morning Vertical


And as for Russia, Savchenko was just the most high-profile example of Moscow's recent habit of hostage-taking: of snatching foreign citizens from their homelands and forcing them to endure ridiculous show trials in Russia. That list runs from Estonian law-enforcement officer Eston Kohver, who has been released, to Ukrainian film director Oleh Sentsov, who has not. For those released, the pattern is similar: the abduction, the transparently absurd charges and cover story, the show trial, and finally the exchange for Russians who have committed actual crimes.

Expect more of the same in the near future.
Posted by Helen at 4:12 PM