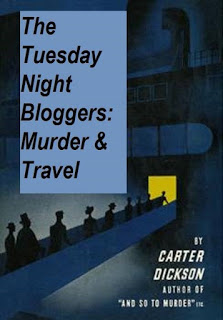 This is the last of the May Tuesday Night blogs about travel and holiday. Next month we shall be covering academic institutions - plenty to choose from there. I have chosen to write about something slightly unusual and that is a motor rally, partly because I am impressed by any writer who can hold my attention on any subject to do with cars, even those of the thirties and partly because John Rhode is a seriously underrated Golden Age author. Curt Evans has written about Cecil John Charles Street who was John Rhode as well as Miles Burton and it would be good to see some of the books back in print. The British Library is reprinting at least two of Miles Burton's books about Desmond Merrion and his talentless policeman friend, Inspector Arnold (this and this), but so far there is no sign of any John Rhode books.

This is all a matter of personal taste, of course, but I marginally prefer John Rhode's Dr Priestley to Burton's Desmond Merrion. 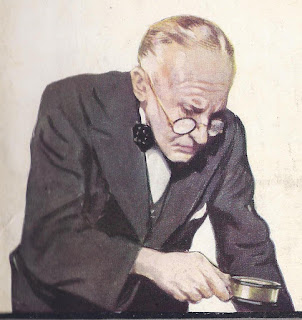 He is a scientist and mathematician though it is not always clear which but on all subjects he gets into ferocious arguments with his colleagues. Where his income is from remains a mystery as he does not hold down an academic position and his books are not exactly best sellers. A side line writing successful detective novels, perhaps? He is often rather annoyed by other people's stupidity and most people treat this characteristic with a pleasant shrug of the shoulder. Oh it's just the old man being his usual self.

There is a secretary-cum-assistant-cum-general slave, called Harold Merefield who is occasionally allowed to find things out for himself but only if he brings it all back like a good dog to the master. Actually, the relationship is a little odd. In the first book of the series, The Paddington Mystery, Harold is a young ne'er do well, who has squandered his money, fallen out with his father's friend, Dr Priestley, and, more importantly, his daughter April and is clearly sleeping with a woman who is not his wife. Well, naturally, he is suspected of murder. Dr Priestley sorts it all out and at the end of the book Harold is about to start working for him and to marry April. Thereafter April disappears. She is mentioned in the second book, I am told, as being on a round of family visits but never seen or heard of again. This I find slightly sinister. Has anyone thought of checking the garden or the basement of that large house in Westbourne Terrace?

John Rhode produced many books between the wars and afterwards as did Miles Burton. In 1935 he sent Harold Merefield off to be a navigator for a small team who have entered the Torquay Motor Rally that involves two people driving alternately for something like forty hours with hardly any stops. By the time our friends find the car that has crashed and left two dead bodies they can hardly stand or see straight themselves. As Sergeant Showerby says when he sees them, unshaven, exhausted, barely conscious: "Well, some folks have queer ways of enjoying themselves, that's all I can say." 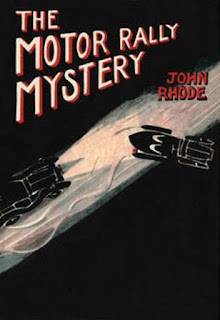 Naturally, the accident turns out to be anything but and Dr Priestley has to sort things out again, though none of the young men are suspected of the murder. Other people are, though.

Wait a minute, I hear people cry, a motor rally? A motor rally? How does that fit into the pastoral, romantic, utopian golden age detective genre? Well, it doesn't because that is not what the genre was, regardless of what people who should know better say or think and regardless of TV dramatizations. Cecil Street was an engineer; he had also served in Royal Artillery. He was fascinated by matters to do with engineering, particularly electrical and motor cars. In fact he was responsible for Eric the Skull who lit up at meetings of the Detection Club.

The Motor Rally Mystery is all about times of driving and various aspects of car mechanics but also about the correct reading of clues, something that apparently only Dr Priestley is capable of. There are certain untraditional aspects to the book. The local police, both sergeant and inspector are really very intelligent though the three young men make snide comments about them. The coroner, on the other hand, is an ass. Superintendent Hanslet of Scotland Yard, a frequent character in the novels, is largely an idiot. He manages to invent several theories that he describes as facts on the basis of no evidence whatsoever. Hanslet's career is a mystery and I can only surmise that he progressed to Superintendent under the rule of Sir Henry Clithering as Commissioner.  That man was notoriously incapable of seeing the most obvious of clues.

The plot is a bit weak. There are clues galore but no explanation until the very end when there is a great car chase, a near crash and Dr Priestley pulls several rabbits out of a hat. One could also do with a few maps - three to be precise, that would show clearly which routes were followed by our team, which by the victims and which by the murderer.

The book ends with something of a threat. The owner of the Armstrong Siddeley Saloon intends to enter the following year's rally and wants Dr Priestley as the passenger. Will the organizers allow it?