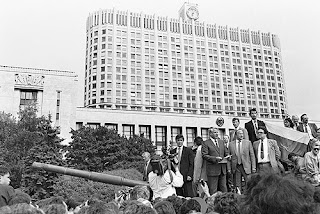 The last blow by the Soviet hard liners, we thought, and how wrong we were. August 19, 1991 saw the beginning of the attempted coup by opponents of both Gorbachev's perestroika and of the new wave of politics that was coming in with Boris Yeltsin. After four dramatic days, the coup collapsed, Estonia declared independence, with the CPSU disbanded shortly after. By the end of the year the Soviet Union had ceased to exist and hope seemed to be in the air.

I spent those days in a TV news studio in London, interpreting Russian news broadcasts as they were shown and thinking about the various friends and acquaintances I had seen earlier that year, all of whom would have ended up in prison or dead if the coup had been successful.

Twenty-five years have passed and things have not turned out well. This is not really the place to go through all the many problems Russia faced under Yeltsin and the path it has taken under Putin back into the past. Suffice it to say that not only there will be no official commemoration of the coup but the organization For Human Rights, led by Lev Ponomaryov have been denied the right to hold a meeting and lay a wreath to the three people who were killed during the fighting towards the end of the four days at the badly looked after memorial to them. The memory hole must swallow it all.
Posted by Helen at 11:05 PM