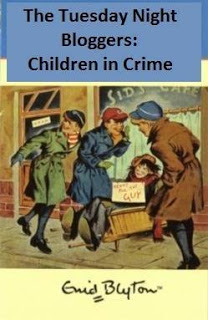 I came across Mabel Esther Allan's Murder At The Flood by accident in a second hand bookshop and was attracted by the title with its echoes of Christie as well as the placing of the story, a huge flood in a Norfolk village (based on the devastating floods of 1953) with its echo of Sayers and Nine Tailors.

The book was published by a firm I had never heard of, Greyladies, which is an imprint of The Old Children's Bookshelf, a children's bookshop in Edinburgh. Altogether an intriguing set-up. They publish what they call "Well-Mannered Books by Ladies Long Gone", reprinting novels fallen into oblivion or never published in the first place. Among them are detective stories by children's writers, such as Noel Streatfield and Mabel Esther Allan who was extremely prolific under her own name and pseudonyms, writing stories about schools (usually rather advanced coeducational ones), ballet and many other subjects that would interest children and teenagers. Often they had a detective or mystery flavour to them, as children's books in those days tended to.

Doing some superficial research for this posting I found that there is some interest in Mabel Esther Allan out there on the internet.

There is a website called The Mabel Project, which set out to cover all Mabel Esther Allan's books but seems to have lasted only two years though it is meant to be a "long-term" project so it might be resurrected.

There is a website dedicated to her papers that are in the de Grummond Children's Literature Collection at the University of Southern Mississippi, something else I knew nothing about. This tells us that she was the author of over 170 published novels for children and what we are supposed to call young adults but I still call teenagers because adults of any kind they are not. There were some privately published books (how lowly that sounded then and yet how important it has become), four volumes of autobiography and eight unpublished novels. Some of these must be for adults.

Murder At The Flood, originally published in 1957, was reprinted in 2009 and is described as Mabel Esther Allan's only published novel for adults. Fantastic Fiction tells me that in 2011 Greyladies published another of her adult detective novels, Death Goes To Italy and from the publisher's own website I learn that Death Goes Dancing, which combines Ms Allan's love for and interest in ballet with a detective plot was published in 2014. Apparently she wrote only three detective stories, all in the fifties and only one of those was published in her lifetime. Rather a pity if Murder At The Flood is anything to go by. 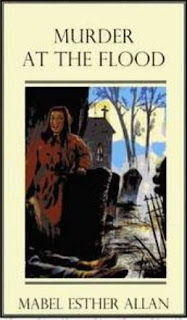 Time to turn to the book and the children in it. As one would expect from an experienced writer for children and teenagers, the author does not simplify either their characters or, most importantly, their relationship to the world around them especially their families and other adults. They are both witnesses in different ways and one of them ends up being a victim.

The story is told from the point of view of the vicar's wife though it is in the third person. She is also a detective story writer though the village does not know this and this becomes the subject of possible blackmail by the man who, understandably, becomes the first corpse. As the story progresses we find out, naturally enough, that he had several victims or potential victims, people he was just approaching. Some of the blackmailable "offences" seem rather silly even by the standards of small Norfolk village of the 1950s, others more important. The one basic problem is that Thomas Long, the blackmailer and first murder victim, is also a malevolent drunkard who could not control either his tongue or his behaviour. This is hardly the stuff blackmailers are made of but his body is found at the end of chapter one and we do not really see him in action.

The flood and the village's behaviour are not dissimilar from those we find in Nine Tailors but while Sayers described the creation of a microcosm that is almost utopian, led by the near-saintly rector, the church and the vicarage is filled with the inevitable dirt, smells, wailing children, complaining old women and, as the news of the first and the second murder spread, pure nastiness. It would seem Mabel Esther Allan did not have a high opinion of humanity, not even in pretty villages set in lovely countryside.

Perhaps she had a low opinion only of adults; the two children are sympathetic characters. Betony Long, daughter of the victim is a bright girl with a deep love of poetry who has been bullied and abused by her father, whom she hates, and stifled by her mother whom she adores. In her early teens, she has been a witness to far too much and is finding it more and more difficult to cope even with the help and support of Emily Varney, the vicar's wife. She knows about violence, anger and hatred; and she knows about profound unhappiness. She is, as we find out at the end, a witness to the murder itself and that destroys her inside before she, in turn, is killed by the murderer.

The other child is Peter Love, the doctor's son, clearly brighter than his contemporaries and many adults who treat him with the sort of condescension that seems to have been the norm but not brighter than his father. That makes an enormous difference between him and the unhappy Betony. He is a witness at several crucial moments. He finds Thomas Long's body and proclaims that fact in the church as people are arriving from their flooded houses. Those who had known about the body had thought to keep it quiet for the time being but Peter puts an end to that and, unintentionally, starts all the vicious gossip about who might have killed the man.

Peter finds a letter that the vicar had dropped, which is taken rather swiftly from him by the self-important Mr Pyke who is "investigating" the crime and is putting everybody's back up. Nobody is too surprised when his dead body is found.

Finally, it is Peter who directs Emily's attention to a pile of very damp books among which Mr Pyke had been rooting not long before his death and where he found some crucial information. Emily finds it, too, but, in some ways, it is too late. Undoubtedly, Peter Love is going to do well at his school but whether he will become a detective is unknown.

In many ways this is a grim tale though there is a happy and summer flower filled last chapter and, in particular, the life and fate of children is not shown as being particularly rosy. One can but hope that Richard and Emily Varney, whose first child is due a few months after the last chapter, will have learnt some lessons.
Posted by Helen at 2:55 PM