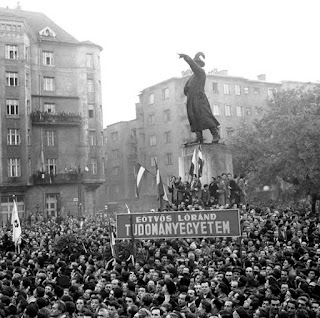 The Hungarian Revolution of 1956 (known throughout my childhood in that country as the Counter-Revolution) lasted such a short period that people tend to get the dates wrong. I have seen comments yesterday about the anniversary of the Soviet tanks invading the country to put the uprising down. That did not happen till November 4 and they did not exactly invade as they had never left. The tanks and the troops had withdrawn from Budapest but fighting had gone on in other cities such as Győr in north-west Hungary. What happened on November 4 was the arrival of huge reinforcements and a move back into Budapest.

Back to October 23. Tens of thousands of people came out to demonstrate for a variety of related causes - from free elections to the abolition of the hated socialist symbols, imposed by he occupying Soviet power; from extra holidays to the return of Transylvania and many others. But overriding all this cacophony was the call for greater freedom and greater national independence.

The picture above is of the original demonstrators, staff and students, from the Budapest university filing past the 1849 Polish and Hungarian hero, General Bem. Somewhere in that crowd are my parents. My brother and I (once I came home from school soon after noon) were looked after by my grandmother. They did not return till late in the evening by which time the demonstration had become an uprising: fighting had broken out by the Radio Budapest where the soldiers, sent to help the ÁVH (the secret police and its troops) joined the crowds, and elsewhere. As demonstrators broke off and approached military barracks, gates were opened and arms surrendered. During the night Soviet military help, which was not that far away, was requested by the government and Soviet tanks entered Budapest. The fighting spread.
Posted by Helen at 1:21 AM