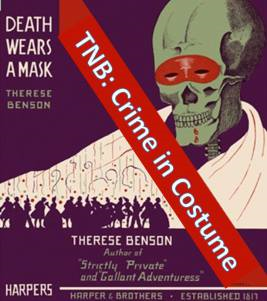 It so happens that I have fairly recently read two detective novels which revolved round multiple masks. To be quire precise, one, Josephine Bell's Death in Clairvoyance was about six people dressed as clowns in green and white costumes and masks at a fancy dress ball and the other one, Mavis Doriel Hay's The Santa Klaus Murder, was about two (as it turns out) people dressed as the not so jolly fat man in red costume and lots of facial hair.

Josephine Bell is one of the underrated writers of both classic detective stories and thrillers. A physician as well as a prolific author, she co-founded the Crime Writers' Association in 1953 and was later its Chair. A number of her books take place in and around hospitals and one of her series heroes is a medical student, later ever more eminent doctor, David Wintringham, who is the semi-amateur detective in Death in Clairvoyance as well. 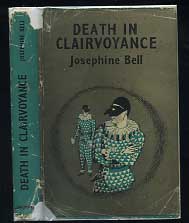 It is 1949, the war is slowly receding into memory though there are still mined areas along the coast and, naturally, rationing, and the Wintringham family, David, his wife Jill and their four precocious children are on holiday by the sea when they become involved in the murder of one clown by, it seems, another clown. Seems is the right word since the murder is either sighted ahead or seen as it is happening in another part of the hotel by a clairvoyant. The victim turns out to be the clairvoyant's husband who had introduced distinctly cheating methods into her seances and caused her imprisonment. In the meantime, there are several chapters of people trying to sort out all the different clowns, who they were, when did they collect their costumes and putting the general mayhem into order.

The Wintringham children go off to investigate on their own and very nearly end up dead - the description of them being caught in a cave after an explosion and having to escape is taut and terrifying. There is another murder, an attempted murder, a seance and the criminal is unmasked.

Fascinatingly, the whole question of clairvoyance is treated with seriousness, leaving the reader to decide whether it is real. David and others spend some time thinking about the subject and wondering whether they believe it but it is clear that Odette Hamilton is not a fraud and does, indeed, see certain things. In fact, she is of some help to the investigators. This is rather different from the usual description of seances, for instance in Sayers's Strong Poison or A. E. W. Mason's At the Villa Rosa, both assuming that such practices are fraudulent though the intentions can be good.

Mavis Doriel Hay wrote only three detective novels in the thirties and these were forgotten until the British Library decided to reprint them. The Santa Klaus Murder is the last one she wrote (in 1936) and is, in my opinion, the best. They are all very well written (Mavis Doriel Hay was also an early graduate of Oxford, attending St Hilda's College about the same time as Sayers was at Somerville) but the other two have an ai of facetiousness that is absent in this novel, though the descriptions are still amusing. 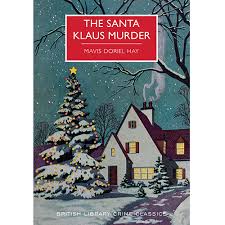 The plot revolves round a possible new will to be made by a very rich man, a Christmas party with lots of incongruous guests as well as obnoxious children and two Santa Klaus costumes. There is a map, which is quite useful though the various comings and goings in the crucial half an hour are almost impossible to follow, a locked room as well as an impossible murder and a story written quite deliberately from several points of view. All very clever and enjoyable.

Though Santa Klaus does not wear a mask, it is a fair point that the hood, the whiskers, the eyebrows (very important) and the heavy dab of rouge makes it very hard to identify the wearer of the costume. Very hard but not impossible, I am glad to say, though I share the view of many children that there is something sinister about that fat man in red.