A sad ending to the year

Naturally, I wish every reader of this blog a very happy, prosperous and satisfactory 2016. For those of us who are concerned with the future status of this country, this will be an important year though, for what it's worth, I still think the referendum will be in 2017. But the various players in the campaign are emerging and lining up. There will be many other things to blog about as well and I have a few projects lined up that will take up time. I do, however, intend to be a little more attentive to Your Freedom And Ours. 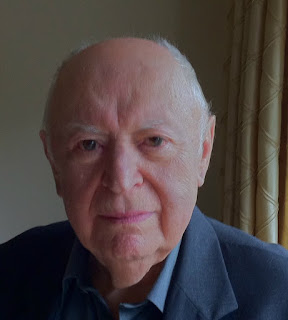 In that connection I must turn to the sadness that overwhelmed many of us who care about that concept in the last few days of 2015. A couple of days after Christmas I was told of the death of Leonid Finkelstein (Vladimirov), a man who was well known among those who fought against the Soviet Union and have, more recently, resumed that battle against the Putin regime.

I have known Leonid for many years, first as a friend of my father's, then as a remarkably lenient boss at the London office of Radio Liberty, where I had a summer job in my undergraduate years, and for a good long time as a close friend. In fact, if it had not been for Leonid, his wife Kira (a colleague of my mother's when they were working on the Oxford English-Russian Dictionary and a good friend of mine) and, above all, their cat, Billy, my doctoral thesis might not have been completed. At a crucial moment in its writing when I was desperate for time and space they asked me to spend two weeks in their house cat sitting. Those two weeks gave me the time and space to write the missing chapter without which the thesis could not stand up. Billycat, as he was known in my family, did not complain.

Leonid came to London in the summer of 1966 as part of a journalistic delegation and found a suitable moment when he could move away from the group, walk into a police station and ask for asylum. For Soviet citizens to do so in the mid-sixties was hazardous business as the Soviet authorities were capable of almost anything to prevent such events. There were cases of failed and successful kidnappings, traffic accidents and even mysterious illnesses, sometimes fatal. Attempts to return Leonid were made but he managed to evade them though his desire to live and work in England meant that he did not see his family again for a good many years.

Using the name Leonid Vladimirov (from his patronymic Vladimirovich) he worked as a broadcaster for Radio Liberty in London and in Munich and for the BBC Russian Service; he reported on British politics as well as led discussions and compiled programmes about British life; he wrote articles and two highly regarded books, The Russians and The Russian Space Bluff. As a science journalist in the USSR he was particularly well placed to reveal the truth behind that country's space programme.

Even after his retirement from the BBC he contributed various programmes, such as this short talk about his imprisonment in Stalin's gulag (oh yes, he was, just like many millions of people). He attended various events and contributed to talks and discussions. I particularly remember a discussion we had at the Centre for Research into Post-Communist Economies (CRCE) in 2004 about Samizdat in the Soviet Union. Leonid was not on the panel but he might as well have been, considering the importance of his contribution. The paper was published. [Scroll down] Other people will have other examples.

In the last few years Leonid and I met at events in Pushkin House as well as CRCE and at demonstrations outside the Russian Consulate. Once again, we all had to join the fight for the freedom of Russia against its state.

Let me not forget chess - one of Leonid's crucial interests. If I happened to call his home to find out how he was after an operation or an illness, I could find him only to be told that he was suffering from an incurable disease - age - or, much more likely I found his wife, Kira, who told me that he was not at home as he was taking part in some chess tournament, possibly in London, possibly somewhere else, near or far. Don't believe me? Here is an interview on the Hamilton-Russell Chess Cup site.

Though I have seen Leonid more recently, my best last memory is from the year before last when my daughter and I took Leonid and Kira out to Ognisko Restaurant in Kensington to celebrate his 90th birthday. It was an extremely jolly evening during which we all had ferocious discussions about Russian literature about which we all disagreed. (No point in discussing Russian politics - we all agreed on that.) I do not have photos from that event but here are two of Leonid and Kira from another dinner in the Polish restaurant, Patio, in 2010: 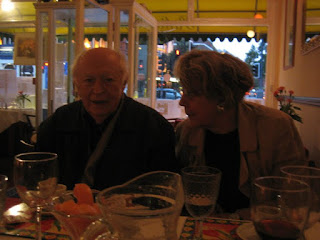 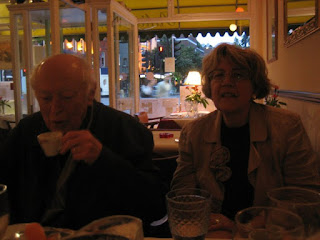 Rest In Peace, Leonid Vladimirovich.
Posted by Helen at 11:02 PM