Tuesday Night Blogs: So what is it about Rex Stout? 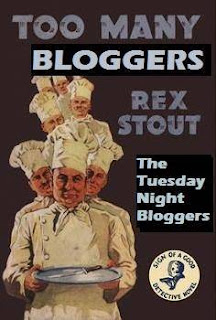 Sooner or later one has to look at Rex Stout's biggest character (and at one seventh of a ton that is le mot juste for him) and that is Nero Wolfe. Looking at Wolfe means looking at Archie Goodwin, the entire household in West 35th Street and other recurring players: Saul Panzer, Fred Durkin, Orrie Cather and the police officers: Inspector Cramer, Sergeant Stebbins and Lieutenant Rowcliff as well as assorted patrolmen.

For various reasons I did not take part in the group blogging last Tuesday but others did and they can be read on Noah Stewart's blog and, indeed, he is in the process of collecting this week's contributions.
\
As this is the last week of the Rex Stout Tuesday Night blogs I thought I'd go back to the very first novel about Nero Wolfe that I read. I had heard about Rex Stout, of course, and about Nero Wolfe but was not altogether clear about things. Soon after I went to Oxford I set up an account at Blackwell's (can one still do that, I wonder) and spent some time wandering round the shop. On my second visit I came across a recently reprinted Penguin version of Murder By The Book, originally published in 1951, a good many years before it came into my hands. It cost 40p (oh those halcyon days!) and the copy is still in my possession. 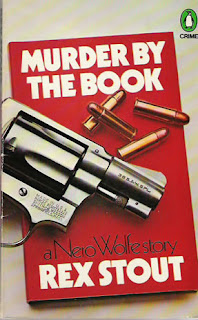 I was lucky with my first Nero Wolfe novel - it has a reasonably good plot that stands up to scrutiny even after we know the not particularly surprising solution. In any case, one does not read Stout for the plots. For the style, yes. It has a light crispness and speed that is hard to find in other writers' work. There is a similarity with Chandler but Archie Goodwin has no pretence to being a chevalier sans peur et sans reproche. Nor does he find life a hardship. His account of events is blithe but never off the mark.

Consider this as a novel read by someone who is a stranger to the great world of Nero Wolfe. Within two pages we establish the relationship between Nero Wolfe and Archie Goodwin and between either of them and Inspector Cramer, who is, it is clear, a reluctant admirer of the large detective. Within the next few pages we have a clear idea of the household, of Fritz Brenner, the Swiss chef who is a genius and of Theodore Horstmann, the orchid man; of the fact that Wolfe hates working though rather likes displaying his superior mental powers (Archie goofs a couple of times in this one, which is unusual); that the entire household revolves round Wolfe's timetable and that revolves round his food, his orchids, his books and the London Times crossword All this is conveyed in taut prose though with many details (who would not like to try Fritz' breakfasts or go dancing with Archie?) and around a fairly complicated plot that involves a trip by Archie to Los Angeles as well as an inebriated dinner party for all the secretaries in a law firm. All in 188 pages.

Beyond the style, the characters, the ambience and, in this case, a decent plot there are some fascinating glimpses. A number of times various people, including Archie, when challenged by the police demand to know whether they have somehow been transported to Communist Russia? From a basically left-wing writer like Stout that is interesting.

Then there is the attitude to women. Throughout the novels we know that Wolfe is a misogynist and there is some kind of a ridiculous reason for it that goes back to his youth in Montenegro. But Archie, who likes women or, at least, pretty young women, shares his contempt. Women, according to this novel, are incapable of thinking, tell lies as a matter of principle and find it impossible to appreciate good food and good wine. If a married woman in her late forties is working then her marriage must be very unhappy. Whereas a perfectly intelligent young woman whom Archie goes to see in LA appears to spend her time at home doing precious little while her husband is at work. Of course, the book was published in 1951, the beginning of a decade that some people seem to want to go back to.

Finally, the lawyers. About a third of the way through it becomes obvious that at the heart of the crimes there is the year-old disbarment of a trial lawyer who had bribed a juror. The question is who reported on him and how did that develop into a badly written novel whose author, editor and typist have all been murdered. Without giving away the ending I have to say I found it a little odd that the trial lawyer who had been disbarred is viewed by most as something of a victim, someone to whom a rather serious misfortune had happened. This, I could not help thinking, was a very odd way of looking at events.

So that was my introduction to Rex Stout and the brownstone in West 35th Street (no, there are no brownstones in that part of Manhattan so Archie must have been misleading readers for all those years) and I was hooked. Many Stout novels and novellas later I can recite with ease Wolfe's time table and Archie's peculiar likes and dislikes. I can remember quite a few of the meals and Archie's quips as well as his rows with the police officers. What I quite often forget, however, is the plot. They are not always and not even usually memorable.
Posted by Helen at 10:47 PM