Still true after all these years 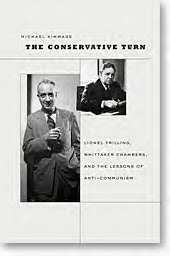 Quite a large proportion of my reading matter recently has been concerned with political and cultural developments in the thirties, forties and fifties. Very little new has entered into our lives since that period.

One of the books on the go is Michael Kimmage’s “The Conservative Turn”, a parallel biography of Lionel Trilling and Whittaker Chambers, both men I admire immensely (though in Trilling’s case there is the odd reservation to do with his worship of the phony Kennedy “Camelot”), and an analysis of the way these two men have changed American political thinking through their anti-Communism.

Whittaker Chambers was crucial to the creation of the new conservatism that is still powerful in the United States, despite the recent electoral results. Let’s face it, politicians come and go but it is the underlying trends that matter. His insistence that there needs to be a conservative movement for the second half of the twentieth century grew out of his understanding of Communism and fight against it.

Lionel Trillling took another path. He moved back to his original classical liberalism and worked hard to detach the liberal left from its support of Communism. Up to a point he succeeded but looking at the position of the left over the Pond I remain doubtful. The support from the left and what is known in American terms as “liberals” for all tyrannical and totalitarian regimes as long as they are supposedly left-wing and anti-American is staggering.

In Britain the situation is even more difficult because the serious fight to install genuine anti-Communism was not fought to the end for a number of reasons, not least a refusal by the political and cultural establishments to take ideology seriously and the consequent inability to understand its influence.

The two men had known each other from their student years at Columbia but drifted apart subsequently. For Chambers Communism became his life while Trilling played at the edges; in the same way the anti-Communist struggle overwhelmed Chambers’s work while remaining only part of Trilling’s. The liberal academic found the conservative journalist a little hard to take. Despite all that, it is astonishing how close their thinking was.

Even more interesting is the relevance of their thoughts to the situation today. Both of them wrote critically about John Steinbeck’s “The Grapes of Wrath”, the book and the highly praised film based on it.

This is what Professor Kimmage says about Whittaker Chambers on the subject (on pages 137 and 138).

Brilliance however, was about all liberals had, in Chambers’s view. They had no ethical sense whatsoever, only a myopia so extreme that evidence of Soviet crimes remained forever invisible. (This was Sidney Hook’s frustration with Henry Wallace.) In a stinging review of the film made from Steinbeck’s The Grapes of Wrath, Chambers attacked fellow travellers: “pinkos who did not bat an eye when the Soviet Government exterminated 3,000,000 peasants by famine, will go for a good cry over the hardship of the Okies.” It was not the impotence of the liberals that bothered Chambers but their power and their ubiquity.

Chambers wrote mostly for Time magazine and his language was, at times, crude and hurtful. He also felt that the time for niceties had gone. One may add that his estimate of peasants deliberately starved to death by the Soviet Government is probably on the very low side. To the comment that cinema audiences are more likely to care about their own, American people than about Russian or Ukrainian peasants, one can answer that Okies were an alien specie to many other Americans, especially to liberal writers and, in any case, they had expressed a great deal of interest in the supposedly high levels of welfare of those foreign peasants, wishing the same on their own people.

Chambers took his criticism of the Left to radical extremes. Liberals and leftists were ignorant of the basic truths that Soviet history had to teach. “How should they [fellow travellers] know that Lenin was the first fascist,” Chambers wrote with unforgiving sarcasm, “and that they were co-operating with the party from which the Nazis borrowed all their important methods and ideas.”
The sickness of the Left was nothing other than the sickness of intellectuals, whose heyday was not the Roaring Twenties but the low, dishonest 1930s. Intellectuals’ alienation from religion and tradition led them to love alienation as such and to mistake sickness for health. “Fundamentally sceptical, maladjusted, defeatist,” chambers wrote, “the intellectuals felt thoroughly at home in the chaos and misery of the ‘30s.” Hence, the outpourings of enthusiasm for The Grapes of Wrath. The tragedy was the twisted decency of intellectuals: “fundamentally benevolent and humane, they loved their countrymen in distress far more than they ever loved them in prosperity”.

If we can discard the unfortunate tendency to use every cliché possible (let us not forget that Auden “loathed” the poem from which that phrase “low, dishonest decade” came from and tried to prevent its republication until the mid-sixties) and the author’s obvious distaste for Chambers’s fury and vulgarity, we find a great deal of very interesting stuff there, repeated oddly enough when Professor Kimmage writes about Trilling’s much more palatable criticism of John Steinbeck and the novel The Grapes of Wrath.

Trilling’s psychological insights drew on a pessimism he attributed to Sigmund Freud. As a radical, Trilling had identified Freud immediately as a threat to radicalism, fearing Freud’s doubts about pity and idealism; as an anti-communist, Trilling used Freud to analyze the relationship between pity and the Left, to debunk pity, and to banish it from mature political thinking. To this end, Trilling attacked John Steinbeck, already a venerated statue in the pantheon of left-wing fiction, arguing that Steinbeck’s problem is literary in part because Steinbeck “thinks like a social function, not like a novelist”.

Steinbeck’s literary failure is less significant, however, than the popular success of The Grapes of Wrath, which Trilling ascribed to a distinct group of people – a class, even. “A book like The Grapes of Wrath cockers-up the self-righteousness of the liberal middle class,” Trilling declared; it is easy to feel virtuous in our love of such good poor people”.

Again, this was an analysis that could explain the pro-Soviet sympathies of the Left in the 1930s. The actual goings-on in Stalin’s Soviet Union was immaterial. The Moscow trials, the various Five Year Plans, and the purges had failed to complicate support for the good poor people of the Soviet Union. A personal sense of virtue and righteousness was at stake for the fellow traveller more than the actual condition of the Soviet people. The reception of Steinbeck’s novel was symptomatic of a political condition in which the Left celebrated, more than anything, the heroic tribulations of its own conscience.”

Well, yes, much more agreeable that Chambers’s “rants”. But, as a matter of fact, the two writers were saying the same thing: the intellectual Left did not want to deal with sordid details if the alternative was to parade its own conscience.

How much has really changed? Communism may not be an issue though, as the Van Jones story shows, the MSM still finds it embarrassing to call the truth on that.

But on other, closely related matters, Chambers and Trilling could write all that now. Our political and cultural elites are still in the grip of “compassion” as if that were a particularly virtuous state of mind. As I have pointed out before, being compassionate is not virtuous but merely a display of superiority towards other people whose lives one wants to manage. I was not altogether surprised at the number of comments I had on the blog and in other places that clearly misunderstood the whole issue. I was told that everything would be fine if people actually acted on compassion. Errm, no. That just makes matters worse.

It underlies the reluctance to criticize with any kind of seriousness anti-Western tyrannies even when they practice everything that “liberals” are supposed to abhor. Ah, but they are the weak. We must support them. The details do not matter.

It underlies our cackhanded way of dealing with developing countries, whose economic development we try to prevent while showering aid that keeps bloodthirsty kleptocrats in power on them.

It underlies the insistence that the state in whatever form is the only entity that can run people’s lives and all those who oppose that merely lack compassion. (Whether that means the state in Brussels, Whitehall or the local council is irrelevant.)

And, naturally enough, it means that the preference is for people to be miserable and downtrodden rather than successful achievers. Our collective conscience does not like success – we cannot feel compassionate towards it.

Odd that we should still be fighting the same battles our parents and grandparents fought.
Posted by Helen at 7:25 PM