If you think politicians have short memories ...

The Evening Standard (not, one must admit, the most reliable of newspapers) had an article by Joe Murphy, their political editor, which said that, according to a recent poll, Ken Livingstone is leading in the mayoral race, of which, thankfully, only three months are left.

To be fair, the lead is so small as to be of no significance, once we remember the error margin and the fact that only about 30 - 35 per cent usually turns out to vote in the London elections. (And, to be even more fair, the comments on the article, by and large, sound horrified at this information.)

This, however, stunned me:


"It amounts to 100,000 Labour voters switching back from Boris to Ken. It looks as though Ken Livingstone's promise to cut fares on buses and the Tube has made an impact."

But the survey reveals a drop in the number of Labour voters who are willing to vote for the Conservative incumbent. Last June almost a quarter of Labour voters said they would choose him - but the "Labour for Boris" brigade has halved to 12 per cent.

Another change is that the number who see Mr Livingstone as "in touch with the concerns of ordinary people" has risen from 37 to 40 per cent; the number who think Mr Johnson is "in touch" has fallen from 20 per cent to 13.

Moreover, the three issues that Londoners regard as most important are those that Mr Livingstone has campaigned hardest on: tackling crime (picked by 42 per cent), improving transport (41 per cent) and easing the cost of living (33 per cent). Only four per cent think promoting London abroad, a regular Boris theme, is a priority.

As it happens, promoting London abroad was a boringly constant theme with Livingstone as well and, as I recall, he even opened a number of highly expensive London offices in various countries, one of which was Venezuela. Have people forgotten that?

Did crime go down, transport improve or cost of living go down under Livingstone? Did it, heck. The amount we paid in taxes for the GLA went up by leaps and bounds every year, apart from 2007. Strange, isn't it? Anything to do with the fact that the mayoral election was coming in 2008? Surely not.

As for the promise to cut fares on tubes and buses, we have been here before, as the Boris Backer site shows. There may be a bias in the site's attitudes but the facts are incontrovertible. 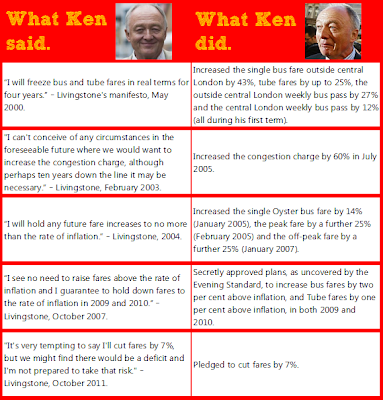 I cannot believe that so many people have forgotten already. (Well, actually, I can.)
Posted by Helen at 9:01 PM