This is sad news 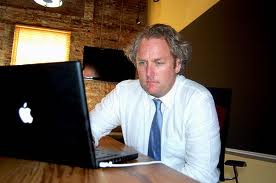 There is, I know, a good deal of sad news around but this has affected me more than others

Andrew Breitbart, one of the most influential conservative bloggers in the US, the founder of Big Hollywood and Big Journalism, among others, the scourge of the left-wing media (not many others) has died of a heart attack at the age of 43. I am told, that, as ever, there is a great deal of rejoicing in what in America is called liberal circles. Well, they are right from their point of view if more than a little tacky: he was an enemy they feared.

Here is Ed Morrissey's obituary on Hot Air. More on Gateway Pundit and Michelle Malkin. There will be many stories in the hours and days to come so I apologize ahead for not posting any more links.
Posted by Helen at 3:50 PM