On the whole I am not in favour of the gradual memorialization of just about everybody who took part in the Second World War. Time was the cenotaph or local war memorials sufficed for us all to remember those who fought in various wars. With the growth of what one might term the World War Two Heritage Industry, the memorials have multiplied with the latest and most hideous one going up in Green Park recently. The Bomber Command Memorial can best be described as Albert Speer's revenge. 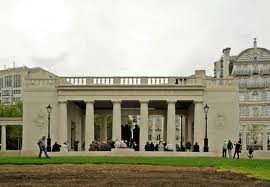 One cannot even say that the feverish memorialization or the endless books published in the last few years have resulted in a better understanding of the war. Rather they have contributed to the entrenchment of mythology and all attempts to overcome it have been met with anger and hostility, as the Boss of EUReferendum found when he published The Many Not The Few.

However, this does not apply to the question of medals and other acknowledgement of people's bravery and achievement. Whatever one may feel about endless decorations personally, one cannot deny that the existing members of Bomber Command and of the Arctic Convoys (a messy and convoluted story) deserve honour and recognition.

So, it is good to know that the PM has accepted the recommendation that all protocol should be set aside and new medals be struck to commemorate what has been described as "the worst journey in the world", that is the Arctic Convoys who took much needed supplies to the Soviet Union (and were not exactly thanked by this country's ally at the time).

Surviving members of Bomber Command, who have not been treated equally with those of Fighter Command, will be awarded a "clasp".

And additional reason for rejoicing is that this takes the wind out of the campaign to allow members of the Arctic Convoys to be awarded (somewhat belatedly, despite the crocodile tears shed by Russian officials and their supporters here) the Ushakov Medal. Just imagine how President Putin would have milked that for publicity and bitter attacks on Britain.
Posted by Helen at 1:31 AM