Books I have been reading: Joshua Rubenstein - The Last Days of Stalin 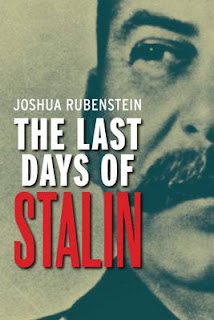 One cannot live by Brexit alone. There will be postings on other subjects. I have decided to start a new thread - books I have been reading (and not just detective stories). To start with, a fascinating new volume by Joshua Rubenstein about the last year of Stalin's life, his death and the months immediately after. So you can all wait for part 3 of my rant, my piece about the latest House of Lords reports and my views on David Cameron's extraordinary pronouncements (though I cannot help wondering whether he is secretly a Brexiteer).

Recent years have seen various biographies of Stalin and some books that concentrate on the last period of his life. This is justified: Stalin's rule and the legacy he left have been crucial to modern history. Also, certain new documents have become available but, more importantly, new analysis and thinking have to produce new books.

Professor Rubenstein starts his book with a detailed description of the tyrant's very last days, from his massive stroke on March 1 to his actual death on the 5th. The story is well known in general but it is good to have it retold in detail, based on various accounts. And a very bizarre story it is, too. Stalin, possibly the most powerful man in the world, so feared assassination that he created rings of security around himself wherever he went and even in one dacha he changed his bedrooms in order that nobody should know where he was sleeping. What it actually created is a situation in which he was safely protected from any help he might have had after his stroke.

Members of his personal guard did not dare to enter his bedroom though they suspected that something must be wrong till the evening of the day after, that is probably about twelve hours after the stroke. When they finally managed to send in a servant who found "Uncle Joe" on the floor, unable to move or to speak or even to control his bladder, they went through a number of stages before a doctor could be called. By that time the various Politburo members who were mostly terrified that Stalin was about to start another major purge had arrived and began their jockeying for position. And so on, and so on.

The book leaves the non-grieving colleagues, the permanently drunk son and the genuinely grief-stricken daughter to wait for the old man's death and moves back to take in the last few years of the great dictator's life, his worsening health, his growing paranoia, the new purge that focused to a great degree on Jews and the threat to his immediate colleagues with whom he played a cat and mouse game. Nobody knew for certain who was in favour and who was out of it. It is no wonder that for many years a story was going round that they actually finished him off when they found him incapacitated. A nice story like the various ones about Beria's end but the evidence is non-existent and Professor Rubenstein will have no truck with it.

There is at least one new aspect: at the time and in the decades since then an assumption has reigned that Stalin was meditating on a plan to exile all the remaining Jews who did not end up in the Gulag or the execution chamber to some part of Siberia with one or two suggestions as to where that might be. Professor Rubenstein has not been able to find any direct evidence that such a plan existed though people spoke of it unofficially and even, occasionally, called for such an act. Had it been Stalin's intention or was he merely encouraging rumours to create even more terror in people's minds? Impossible to tell.

Finishing Stalin off, so to speak, the author moves to the post-Stalin era, analyzing the immediate developments inside the country and in the world, the possible missed opportunities though these were somewhat chimerical. Inside the country and the Soviet colonies there were several developments: there was the inevitable struggle for power, which first destroyed Beria, leaving Malenkov in apparent command until he was outmaneuvered by Khrushchev and Bulganin. The book does not go far enough to show Nikita Sergeyevich emerging as the undisputed leader. It is worth noting that the people Khrushchev pushed aside with the exception of Beria and his immediate acolytes were not even imprisoned, let alone murdered. About Beria he was clear and his colleagues agreed: it was either him or them. Curiously enough, what Khrushchev said and thought about Beria echoed Bukharin's comments to the Menshevik Dan about Stalin. The difference was that Bukharin did not seriously try to prevent the destruction that Stalin, he knew, was planning; Khrushchev preferred to move in first.

There were some economic reforms, and gradual release of prisoners, first criminals, which was not exactly a huge success but, after a few months, politicals; there was the abrogation of the Doctors' Plot and the release of those medics who were still alive (if only just after the torture and maltreatment).

Then there were the uprisings in the camps, put down ferociously but they did signify that some changes would have to be made. There were riots in several East European colonies, culminating in the East Berlin uprising on June 17. After that the more open attitude to the West became once again closed but cautious changes inside the country continued: a slight weakening of censorship, a slightly different economic outlook, a possible greater openness towards other countries. The book stops with all these tentative steps being taken and with the power struggle gearing up. One cannot help hoping that Professor Rubenstein will pick up the story in a following volume that will take in the uneasy years that led up to the Twentieth Congress and what happened then. Meanwhile, let me recommend this book to anyone who seriously wants to understand events in the second half of the twentieth century (and, let us face it, the beginning of the twenty-first). It is informative and moves at a thriller's pace. What more could one want?