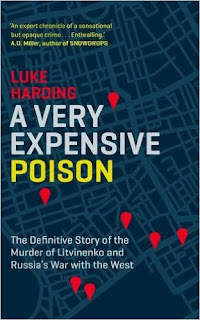 Last Friday I went to the Open Russia Club in London, specifically in Hanover Square, usually an elegant Mayfair space but currently a building site that requires careful navigation. I think it is Crossrail that is causing the havoc but one can never be sure about these things. The Club was co-hosting an event with the Russian Political Club: a discussion led by Luke Harding and Marina Litvinenko about the Litvinenko murder and Luke's book about it and about the inquiry that finally concluded with a very detailed and accurate report.

I assume most people remember the murder of Alexander Litvinenko on November 1, 2006, his slow death in the hospital during which he managed to give detailed information to the police and the public about those responsible for his sufferings. We can recall the various theories, some completely mad, which were often fed to unsuspecting hacks by President Putin and his chekists. There was a real outrage that such an event could happen on British soil to a man who had become a British citizen. Whenever I was asked on the BBC Russian Service what I thought about Anglo-Russian relations and attitudes, I pointed out that however positive most people in this country feel about Russians the murder of Alexander Litvinenko shocked everyone. I also recall my favourite Itsu outlet on Piccadilly being closed for several weeks because of suspected Polonium on the premises. 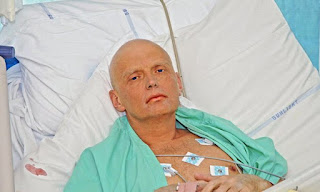 It took years for an inquiry to take place with many difficulties placed in the way, not least by the FCO (well, there is a surprise) and successive politicians who did not like to upset dear old Vlad and his mates of whom Andrey Lugovoy, the man accused of the murder together with Dmitry Kovtun, is one.

The campaign for the inquiry was led by Alexander's widow, Marina, a lady of steely determination who was finally vindicated earlier this year. She is also extremely photogenic though the light on the stage at Friday's event was such that I could not take any pictures with any hope of them coming out. So, instead, I am putting up a photo of Marina Litvinenko speaking at a meeting outside the Russian embassy on March 1, 2015, which was a time for mourning as it was a few days after the assassination of Boris Nemtsov and a time for protest about Russian activity in Ukraine. The picture, taken by Katharine Szamuely (relation) caused something of a twitter storm and I am happy to reproduce it again. 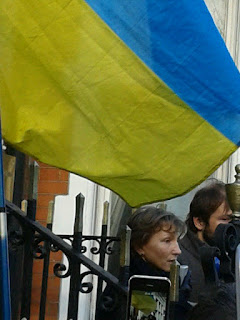 A few interesting points were raised. One of the questions many of us ask is whether the long-drawn out and very public death was part of a deliberate plan or a complete mess-up by incompetent agents. I have always held the view that this was deliberate (though the agents who left traces of Polonium 210 all over London were clearly incompetent) to frighten any potential FSB agents who might think of rebelling and abandoning the Putin gangster state. "Don't even think of it. This will happen to you." A threat also to those who might have thought of investigating those apartment block explosions though, given the death rate among potential investigators, there cannot be many people left with such weird ambitions.

Marina Litvinenko thinks otherwise. In her opinion, the whole thing went badly wrong as there were several attempts before they finally succeeded and the intention was for Sasha Litvinenko to die quickly of some mysterious illness. Instead, he lingered on in hospital, horrifying everyone with his appearance and spending many of his last hours being interviewed by officers of the Metropolitan Police who then followed up his evidence. Well, maybe. I am still not sure.

Luke Harding agreed with that analysis, telling stories about the two hapless murderers, particularly the second one, Dmitry Kovtun, who told his friends in Germany that he was carrying strong poison to Britain though he did not know exactly what it was. He also tried to get a friend of his who was a chef to add the poison to Litvinenko's food. The friend who was not in London anyway, refused and reported the whole conversation to the police. I don't know. Maybe the FSB does hire incompetents.

Lugovoy had his children with him when he met Litvinenko and introduced them so clearly he had no idea that there was a possibility of radiation. Luke Harding described the presence of the younger Lugovoys as an act of consummate cynicism but to me it seems quite sensible behaviour (assuming there is no knowledge of what the poison was): after all the more normal everybody's behaviour is, the less likely the victim is to tumble as to what is going on until it is too late.

Incidentally, Lugovoy, according to Luke who interviewed him a couple of times, is a great Anglophile, possessing, among other books, the complete works of Sir Arthur Conan Doyle in Russian and sending his daughter to study in Cambridge. It is obviously, something of a personal tragedy that he cannot come back here without finding himself in the dock, charged with murder. (And my heart bleeds for him.)

Finally, there was praise meted out by the author: firstly to Marina who fought that long and hard battle, then to Sir Robert Owen, the Inquiry Chairman who listened carefully and produced that well argued report, and to Scotland Yard who had continued to investigate the crime even though, officially, the case had been suspended. At the inquiry many hundreds of pages of evidence was produced, including some from the late Boris Berezovsky, written, it seems, in his own inimitable English, and over sixty witnesses. Chapeau bas. Oddly enough, I had personal knowledge about Scotland Yard beavering away. Some years after the murder I was cat-sitting for my good friends, Kira and Leonid Finkelstein and one of the telephone messages I had to take was from a detective sergeant in Scotland Yard who wanted Leonid to call him back in order to discuss some matters pertaining to the Litvinenko case.

We may never know everything about the murder and events around it but we have come close to that.
Posted by Helen at 7:16 PM