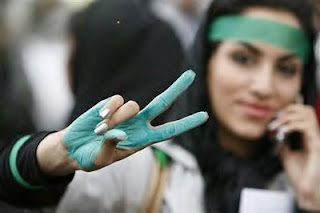 In case the Mad Mullahs of Iran and their puppet "President" Ahmadinejad succeed in destroying the opposition - and the news is that meetings and protests are continuing but they are being viciously broken up with leaders arrested across the country - let us not forget that they are sitting on top of a barrel of dynamite. Via Instapundit we get a picture that sums up much.

I do wish our media stopped referring to Ahmadinejad as the man who won the election and to Mir Hossein Musavi as the loser. There are serious doubts about that election and a few references to that might be useful instead of the implication that the protesters are ridiculous and unpleasant opponents of the democratically elected leader.

Meanwhile, President Obama is still desperately seeking his chance "to engage" in dialogue with Teheran, pronouncing himself to be "disturbed" by the violence. While it is sensible not to take sides at this stage and even reasonably sensible to say this is for the Iranian people to decide (let us hope he feels the same way about the truly democratic state of Israel and its Prime Minister, Netanyahu) a few words of encouragement for democracy might come in useful. It does look a leeeeeeeeeeeetle like the President would prefer the Mad Mullahs and their puppet to win though why he thinks their negotiations would be conducted with anyhting but a forked tongue is anybody's guess.
Posted by Helen at 11:06 AM