Jane Austen’s two unfinished novels were completed by several hands, each pedestrian and imitative; other novelists have produced continuations to such brilliant creations as “Pride and Prejudice”, all short of the original.

Other hands have finished “The Mystery of Edwin Drood” but have never managed to live up to Dickens’s standards of writing and have merely succeeded in deepening that mystery.

It is tempting to have a go at finishing what great writers have begun; it is even more tempting to continue the lives or adventures of much loved characters. We all want to know how the Bennett-Darcy marriage fared as Jane Austen gives frustratingly few details. Then again, Dickens does give many details in his last chapters but we still want to know whether Nicholas Nickleby managed to squander his wife’s money. Well, no, maybe we do not care all that much. But we do want to know what happened to Edwin Drood.

The greatest temptation lies with well-known and well-loved characters who have transcended their fictional environments. Many of them are detectives whose lives and adventures have been continued by other hands.

It is hard to give up the notion of a new case for Sherlock Holmes, Nero Wolfe or, perhaps, Hercule Poirot. Agatha Christie disposed of the last one by his death in “Curtain” and, in any case, he and Miss Marple as well as Inspector Battle and Colonel Race are still in copyright. Why the estate allows those misguided perversions on TV is anybody’s guess but, apart from that, no new adventures can be written.

Sherlock Holmes was first brought back from the dead by his reluctant creator who then remained chained to the Baker Street ménage for many years to come with the stories getting ever weaker (though I do have a fondness for the autumnal sadness of “His Last Bow”). Homes, Watson, Mrs Hudson, Lestrade and sundry other police inspectors as well as the Baker Street Irregulars became so real in people’s minds that the idea of there not being any more adventures after Sir Arthur Conan Doyle’s death cause mass neurosis across the planet. 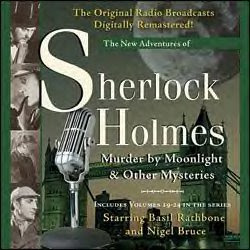 Adrian Conan Doyle and John Dickson Carr valiantly tried to step into the breach and produced various new and further adventures and exploits of Sherlock Holmes. They were not very good though not quite as bad as the radio programmes Basil Rathbone and Nigel Bruce recorded in the forties. Those are actually rather entertaining, what with the improbable plots, ridiculous dialogue and references to the ongoing conflict in Europe and the Pacific.

Subsequent attempts to write Sherlock Holmes stories failed with the exception of Nicholas Meyer and his wonderfully witty “The Seven Per Cent Solution”. (And even he then produced a couple more unmemorable novels.) More recently writers have been producing new, long to the point of bloatedness adventures with Inspector Lestrade as the hero, Irene Adler as the heroine or even a young student of ancient languages who is successively Holmes’s pupil, assistant and wife. None of them come anywhere near the original stories.

Other detective characters have also suffered posthumous resurrections. Jill Paton Walsh completed Dorothy L Sayers’s unfinished “Thrones, Dominations”, which I have read and wrote another Lord Peter Wimsey story on the basis of Sayers’s notes, “A Presumption of Death”, which I have not.

Ms Paton Walsh is a writer of detective novels herself (as well as other literature) and her plots are usually infuriatingly sloppy. They work well until one realizes that the ages of characters do not correspond to the time that has elapsed or that certain developments are inherently unlikely in the social and geographic settings given.

Her Lord Peter is not only credible in Sayers’s terms but is actually a more appealing person as she cannot quite recreate the snobbery of the original novels and has not fallen in love with the character. Her Harriet is also more likeable than the original, who steadily becomes more infuriating through the novels till one feels like throwing the book, specifically “Gaudy Night” out of the window. (But I didn’t.)

The plot of “Thrones, Dominations”, on the other hand, is silly even by the Wimsey saga standards.

Then there are the Nero Wolfe adventures. Rex Stout turned out around seventy volumes, most of them of unsurpassable silliness. Their great strength is the atmosphere: the house on West 34, the description of New York City (with occasional forays outside) and, above all, the characters.

There is Wolfe himself, the gigantic Montenegrin who has become the best known private detective in NYC. He weighs one seventh of a ton, reads lots of books, loves food for quality and quantity, drinks a great deal of beer, cultivates orchids, tries never to leave his home and has opinions on many things, though, sadly, these tend to be rather trite, despite the man being a supposed genius.

The undoubted hero is Archie Goodwin. Charming, clever, good with guns and self-defence, indefatigable and completely loyal to Wolfe despite many provocations. He is also a wonderful writer since it is his accounts we read, presumably, as noted down by Rex Stout.

There are the household, Fritz Brennen the brilliant chef and Theodore Horstmann the orchid man; the police, Inspector Cramer, Lieutenant Rowcliff and Sergeant Stebbins, the last two waging a perpetual losing war with Archie; there are the free-lance operators, led by Saul Panzer, Archie’s girl-friend, Lily Rowan (though he loves dancing and takes many other girls out), the journalist Lon Cohen and assorted others who turn up from time to time.

There are sites devoted to Nero Wolfe, among them Wolfe Pack, which is the official site of the Nero Wolfe Society and Merely a Genius, which is, presumably, an unofficial site.

It was inevitable that the death of Rex Stout would cause a world-wide neurosis and that there would be other hands ready to pick up where Stout left off. The safest pair turned out to be Robert Goldsborough’s. He is an old newspaperman and an author of other detective stories as well about Chicago in the thirties. But his first fictional efforts were several new Nero Wolfe adventures.

The story is that Mr Goldsborough’s mother who had introduced him to Rex Stout’s writings, sighed for a new Nero Wolfe adventure when she heard of the writer’s death. As she herself was ill, too, her affectionate son decided to brighten her life by writing one, “Murder in E Minor”.

This was later accepted by the Rex Stout estate and published. The second novel in the series was “Death on Deadline”, the one I read last week. That sent me off musing about continuations of classic novels and new adventures for those well known detectives. 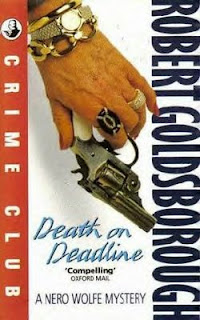 The good news is that Mr Goldsborough produced a novel, which was roughly the same length as most of Rex Stout’s were, clearly not feeling the need to write a blockbuster. The plot is marginally better than all but about three of the Stout ones were and the characters are accurate enough.

The book is well enough written though there are various literary infelicities. Archie Goodwin seems to be altogether too fond of the words “total” and “totally”; the Archie we know and love would never have written “that was totally uncalled for”. He also splits infinitives rather a lot. Nero Wolfe would never have used the word “quisling” wrongly.

The updating is skilful. The self-righteousness of the media, particularly of TV journalists in the post-Nixon era is well observed and, indeed, the omnipresence of television both in the form of its journalists and as entertainment is cleverly shown.

There are two serious problems, both endemic to the continuation industry. One is the slightly mechanical aspect of the characters. Goldsborough did not create Nero Wolfe and Archie Goodwin any more than Adrian Conan Doyle created Sherlock Holmes and Dr Watson; they are merely putting somebody else’s creation through their paces and it shows.

There is a carefulness, an artificiality about all continuations, a fragility as if the authors were afraid of the mechanism breaking down. The alternative seems to be something along the lines of Caleb Carr’s “The Italian Secretary” in which Sherlock Holmes is so unlike the original or, indeed, any possible Victorian character that the book becomes a monstrosity.

The other problem is the politics. With Rex Stout we think we know Nero Wolfe’s politics but it is cleverly obfuscated. He is generally against big government and, usually, against big business; dislikes Washington DC and federal authorities though both he and Archie work for those authorities during the war.

Does that put Wolfe on the right or on the left? In American terms that is not clear. Both sides have small government, populist anti-big business aspects; indeed, in modern America it is more likely to be the right that preserves what might be termed the traditional American values.

Things are somewhat different in “Death on Deadline”. Lon Cohen, of whom we know little except that he works for the Gazette, either dispenses information for Archie’s benefit or is given a scoop, and plays poker once a week with Archie, Saul Panzer and Fred Durkin, moves to the centre of the stage.

Lon apparently has a wife though when he sees her is a mystery to all and one that Nero Wolfe really needs to solve before there is a messy divorce. Secondly, he turns out to be a Journalist with a capital J who dislikes the idea of the Gazette being taken over by a Scottish [?] tycoon who runs newspapers just for profit. Shock, horror. Mind you, Lon does not dislike what must be a substantial salary or his pension or profit shares. That idealistic he is not.

Wolfe and Goodwin come out on the same side. The sacred nature of crusading journalism is just that … sacred. One must admit, however, that the journalists that Archie has to deal with show themselves to be stupid and unpleasant.

To push the plot and to show his soft left credentials Nero Wolfe takes out a page-size advertisement in the New York Times calling on all decent people to prevent the take-over of the Gazette. His argument is that the tycoon has taken journalism down to unheard of levels of sleaze and smuttiness but, even more importantly, he has supported all right-wing causes and has never thrown his weight behind a Democrat politician. His newspapers have consistently supported Republicans. Can’t have that, can we?

One cannot imagine Rex Stout’s Nero Wolfe and Archie Goodwin making such utter fools of themselves. Probably they did vote Democrat but, given Wolfe’s dislike of big government, maybe not, unless he was considerably less logical than he is supposed to have been.

We must ask ourselves what makes authors who decide to prolong the adventures of well-known and much loved detectives of the past turn them into mushy progressives?
Posted by Helen at 11:23 AM