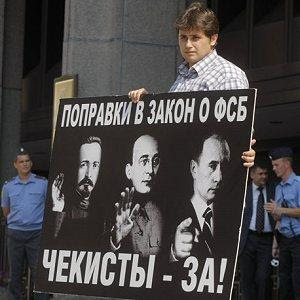 Radio Free Europe/Radio Liberty (RFE/RL) reported a few days ago that President Medvedev (the man who was going to turn Russia into a legalistic state or, as certain Russian political thinkers in Russia described what they were after in the nineteenth century, rechtsstaat) which will give yet more uncontrolled power to the FSB.

The controversial bill, which passed its third parliamentary reading on July 19, empowers the FSB to issue official warnings to people judged to be laying the groundwork for a criminal act "against the country's security."

The law also establishes fines and detentions of up to 15 days for people seen as hindering the work of an FSB employee.

The final version is tamer than the original draft, which proposed the FSB could summon potential suspects to their office and even publish its warnings in the media. But it still has plenty of critics.

The Kremlin says the legislation will contribute to the fight against extremism and help people steer clear of behavior they may not even realize is illegal, such as participating in unsanctioned protest rallies.

Well, yes, they may not realize that participating in rallies will somehow affect Russia's security. Clearly, journalist who try to report on certain matters to do with the FSB can be seen as hindering the work of an FSB employee or, even several FSB employees.
Voice of America quotes Sergei Markov a Duma Deputy from the Putinite United Russia as giving a somewhat incoherent defence:

"It's almost nothing. It just the right to send some kind of warning to the people the FSB has information that their activity could potentially lead to a contradiction to the law," said Markov. "I think criticism of this law is more propaganda."

He says mostly the law is intended to confront terror threats originating in the North Caucasus, the scene of ongoing violence linked to Islamist extremists. As an example of how the law could be helpful, he says it could alert non-governmental organizations that terrorists are attempting to infiltrate their ranks.

Or that the government has decided to accuse them of being infiltrated by terrorists.

The poster shown above created by the liberal Yabloko group says it all: the Chekists are for it - Dzerzhinsky, Beria and Putin.
Posted by Helen at 10:25 PM