Of cabbages and kings 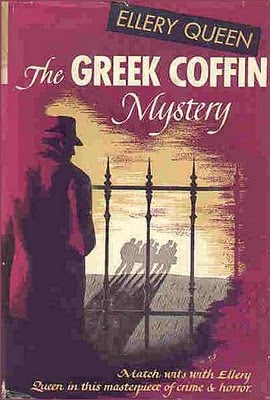 Well, actually, of detective stories and other suchlike matters. I have just spent four days away from cyberspace and feel all the better for it. Unfortunately, duty called and I returned. There are several stories I need to write about such as the forthcoming State of the Union Address by one of the EU Presidents (we have two and the Americans have one, nyah-nyah-nyah-nyah!) and the fact that American authors are now protected from British libel tourism as Rachel's Law has been signed by the President. Plus there are at least two really stupid articles by supposed experts, one British, one American, about the EU that need to be mildly fisked.


Tish-tush. I shall write about detective stories. One of the books I read in this interval was an early Ellery Queen, entitled The Greek Coffin Mystery, which, I was assured by such experts as Julian Symons, was one of Queen's best.
The Ellery Queen phenomenon is quite complicated. Created by two cousins, Frederic Dannay and Manfred Bennington Lee, Ellery Queen is the author as well as the hero of a number of detective novels, being in his capacity as a hero, the son of New York Police Inspector Richard Queen of extraordinary obtuseness who allows and, indeed, encourages his son to spend his time interfering in police investigation on no grounds whatsoever. Then there was Ellery Queen's Mystery Magazine, probably the most influential publication of that kind in the entire history of detective story writing, which launched many a career and published many an excellent story. And much more.
The Greek Coffin Mystery is, in fact, a very bad book. It is not absolutely terrible, as somebody pointed out to me, but it is bad. It is very long at 300 pages, which includes the introduction and the challenge to the reader about three quarters of the way through, aspects that were dropped in later novels. There is also the amusing idea of making the one word chapter titles into an acrostic that spells, yes, you guessed it: The Greek Coffin Mystery By Ellery Queen.
The plot is preposterous by anybody's standards though not as bad as those ghastly locked-room mysteries that John Dickson Carr alias Carter Dickson churned out by the dozen. The language is so full of adjectives that reading begins to resemble swimming through treacle. Above all, there is Ellery Queen, young, self-important, drawling, full of quotations and unnecessary foreign sentences and generally objectionable. The authors' inspiration was the ghastly Philo Vance who, as Ogden Nash so appositely said, "needs a kick in the pance". (Though there is one thing to be said for Mr Vance: he was played by William Powell in a number of films. I believe I actually saw one.)
In between retrieving the book from whichever corner of the room I had chucked it, I spent some time wondering why the dandyish, know-all, drawling detectives were so much more tolerable in their English version than in the American. However irritating Lord Peter Wimsey is in the early novels, or the young John Appleby or, even, the young Roderick Alleyn before he meets Agatha Troy and becomes more or less human are, they cannot compare with Vance or Queen. These two make one feel positively murderous oneself.
Of course, I am biased, when it comes to Wimsey in that I hear the mellifluous tones of the incomparable Ian Carmichael (as seen above with Mark Eden who plays Detective Inspector, later Chief Detective Inspector Parker who also becomes Wimsey's brother-in-law in Clouds of Witness).
As it happens, I do know that Edward Petherbridge has also played Wimsey very successfully. In fact, I saw him on stage in Busman's Honeymoon and very good he was, too. Only one thing was wrong - he was not Ian Carmichael. Allowing for that, why are Ellery Queen and Philo Vance so utterly irritating to the point when one wants them to be wrong? (In fact, Queen is wrong in his first solution in The Greek Coffin Mystery and the authors have a great deal of fun with him. He is supposed to have learnt his lesson from that but, in actual fact, he remains as unbearable as before with the added problem of never telling anybody anything until he has it all worked out.)
So why are the Americans more irritating? The obvious answer must be that these are imitations. What on earth are New England Americans doing drawling and droppin' their gs? Why is Ellery Queen always sighing wearily? He is in his mid-twenties even if his father is described endlessly as being old, having old eyes, old knees, old hands. Just how old is he, for goodness sake?
There is also the feelin' that these American johnnies are just pretendin' to know things, don't you know. Don't know why there should be this feelin' in the thingummy about them; after all Harvard is as good a place as dear old Oxford, so why does one assume that the young Appleby (he becomes quite responsible and respectable later on) actually knows all about Greek epigrams whereas Ellery Queen probably spends his time reading a dictionary of quotations?
But the most remarkable aspect of those irritating young asses (well, relatively young) Wimsey, Appleby and Alleyn (I have to admit to being unable to stomach Albert Campion at any price) is that they do change and develop over the span of the novels. They all acquire spouses who are all strong-minded women with careers. Even Campion marries Amanda Flitton, who is an aeronautical engineer. There are families and the characters grown and mature. Very curious that, as detective stories are not given to developments of character as a rule.
I am now going through Dorothy L. Sayers' novels in order so, at least, one good thing has come out of my reading that egregious Ellery Queen adventure. I do not intend to read any more of them.
Posted by Helen at 11:54 PM