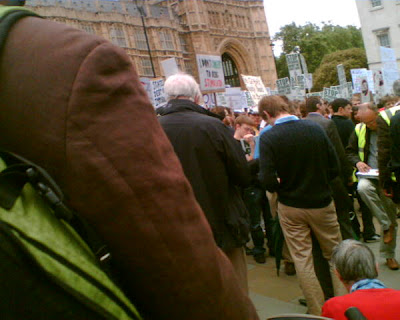 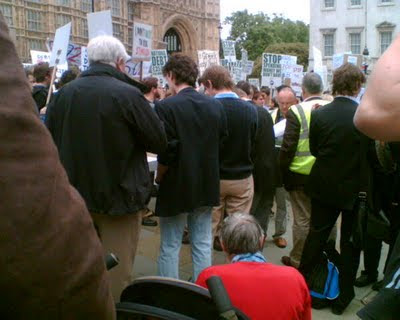 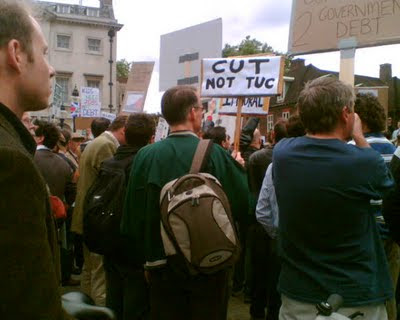 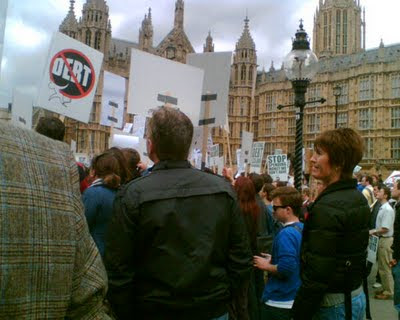 About 350 people turned up for Rally Against Debt, which is not bad, given the lack of money and resources behind the organization of it. It's not like we had taxpayer sponsored unions to provide transport to thousands of people from all over the country - all who came paid their own way. And, of course, it was largely organized through blogs, twitter, facebook and word of mouth with some help from the MSM.
Some nice home-made placards. I liked the chap who was wondering round with a large notice that supported the cuts "if there are any". Someone else pleaded for Britain not to have a Greek tragedy; one person encouraged people to read Ayn Rand (he likes the woman's novels whereas I advise everyone to stick to her essays as they are shorter and pithier); one person even informed the world that Che was a mass murderer and that t-shirt is not funny, on the grounds that Bob Crow has been known to wear one of those. Anyway, it was good humoured and Old Palace Yard was left spotless afterwards. We are, as a well-known blogger said to me, civilized people.
Some cars going by hooted in support but my favourite sight was that of a police officer explaining to somebody who was just there to take photographs why we should not be bailing out other countries. The rest of us stood back and let him get on with it.
Will anything come of it? Hard to tell. The Tea Parties over on the side of the Pond started with far smaller meetings but they were across the country in many different states, organized by local people who became activists out of frustration with their party politicians. This is still only London and two of the speakers were Tory MPs with one UKIP MEP. (One couldn't hear the speeches so it really is of little importance what they said but one can imagine.)
There has been a reasonable amount of coverage, which surprised us all: the Guardian, the BBC (with the Greek tragedy poster), the Telegraph and news on AOL.
Posted by Helen at 8:21 PM