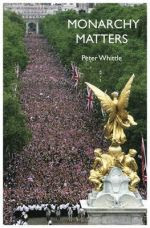 It is about time this blog had a book review and I can think of no better subject than Peter Whittle’s recent Monarchy Matters, published by the Social Affairs Unit. (Full disclosure: Peter is a friend and I have at various time written both for the New Culture Forum, of which he is the Director, and for the Social Affairs Unit.)

There is something about the Monarchy that seems to send even sane people completely loopy. Some of the comments before the (first) Royal Wedding of 2011 could not be characterized as anything but insane. People who would never call themselves Republican and would scream with horror if one accused them of toeing the left-wing establishment line, choked with bile and predicted dire events, such as a complete lack of interest, disgust with the expense, maybe a riot or two (though how that could happen with a complete lack of interest was never explained). When reasonably sane people like Melanie Phillips boil with anger because …. Good Heavens! … the Beckhams were invited to the wedding, you know something has gone desperately wrong. (To be fair to Ms Phillips, she did later write that it was all a huge success and the leftie whiners had been proved wrong. No mention of her own piece of whining.)

What had gone wrong, just as it had done with the Golden Jubilee and the Queen Mother’s funeral, was the mentality of those who presume to lecture us or lay down the rules of our thinking, whether they be on the Left or the Right. The wedding was a huge success – more than a million people turned out to watch the event, many millions watched it at home and billions did across the world. The bride looked lovely, the groom looked nervous, the best man looked worried then cheerful and the maid of honour stole every male heart in the land. The Queen’s yellow outfit became an instant success and so on, and so on. The point is, at Peter Whittle, explains in this excellent little book, the Monarchy reasserted its position as the unifying symbol of the nation, the one institution that we can all look to and accept as our own. It is at one with the country, no matter what the bien pensants might think or say. It is at one with the Commonwealth, as seen in Canada when the now married Duke and Duchess of Cambridge garnered applause and adoration on their recent visit. In fact, I would say that there is more life in the Monarchy than in the Commonwealth but that is an argument for another time.

Monarchy Matters traces the ups and downs of that institutions history and relationship with the people of this country and points out the interesting fact that, no matter what happens, only 18 per cent consistently say that they would prefer a presidential system (and many of them blanch when one points to the likely candidates for that presidential position). Nearly 70 per cent, in other words, consistently prefer the system as it is and are prepared to overlook problems with individual members of what is sometimes referred to as the Firm, understanding full well that it is the actual institution that matters not personal foibles, particularly as they tend to be over-ruled when needs be. (Diana was the one important exception in that respect, as no one can take Fergie seriously, and even her vagaries as well as the tragic death are now part of the royal mythology.)

Many monarchists out there feel that, although they might be in the right, they do not necessarily have the arguments with which to defeat the media produced propaganda. Well, here is a book that will provide them with arguments to be used.

(A version of this article will be published in the September issue of the Salisbury Review.)
Posted by Helen at 12:48 PM