Let us look back 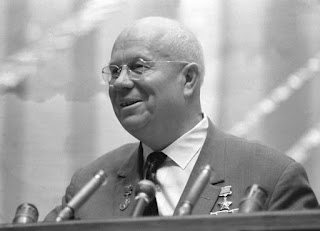 As we approach March 5, the presumed anniversary of Stalin's death (it was announced on that day but that means little) it may be a good idea to look at an event that took place on this day three years after the old tyrant's demise: Nikita Khrushchev's speech at a secret session of the Twentieth Congress.

I wrote about it on the fiftieth anniversary, referring to the people who still wished it would go away and we would be back to February 24, 1956. No such luck.


Fifty years ago, on February 25, 1956, Nikita Khrushchev, the First Secretary of the Soviet Communist Party, mounted the podium to give his report on the final, closed session of the party’s Twentieth Congress. It was, to put it mildly, an unusual report.

Instead of the expected boasts and admissions of failure (to be blamed on someone else) Khrushchev delivered a four-hour long speech in which he denounced what he first referred to as the cult of personality that had grown up around Stalin. In effect, he denounced Stalin and some of his crimes.

The speech concentrated on the purge of the party and the destruction of the Communist cadres through “glaring violations of revolutionary legality”. Little was said about the many millions of other victims but there were references to the destruction of the agriculture (and by inference, of the peasantry), to Stalin’s grave mistakes in the Second World War (the full horror of that is still largely unknown in Russia), the deportation of whole nationalities at the end of the war and the paranoia of the doctors’ plot.

Like a good Soviet apparatchik, Khrushchev made no references to the largely anti-Semitic nature of the second purge, which was gathering momentum as Stalin fortuitously (or, perhaps, not) died. But he did quote Stalin’s instructions on how to extract confessions from the various highly placed medical specialists and their assistants, all of whom had been arrested: “Beat, beat, beat and beat again”. Few survived.

It is said that the speech produced an unprecedented effect. People fainted in the hall. Supposedly secret, the speech was passed on to some Soviet and East European organizations. It was also smuggled out by one or two of the foreign Communist leaders who had been present. (One, the leader of the Polish party had a heart attack and died.)

The Poles passed the speech on to the Israelis, who passed it on to other western countries. Very swiftly, the so-called secret speech was known all over the world, though in the Soviet Union its existence was denied till the late eighties when it was finally published.

There is more in that piece about what Nikita Sergeyevich did not say (though he went back to the subject in another speech, this time open and more detailed, at the Twenty-Second Congress in 1961, which really did unleash discussions of the subject. In my very ordinary school in Budapest, the weekly form-teachers' lessons were set aside for the discussion of the speech and what it meant for the concept of Communism. We were in our early teens. It can be imagined how much more was said among our elders if not betters. How different from 1956 when the secret speech had to be smuggled in to meetings of such groups as the Petöfi Circle.

I wrote about it again when the death of Viktor Grayevsky, the man who passed the speech over to the Israelis who disseminated it in the West, was announced.

We know how little is said or written about the horrors of Communism, which is seen as being somehow better and nicer in intention than the other monstrous ideology of the twentieth century, Nazism. Just imagine how people felt when the truth began to be spoken in the country where the system was created and first tried out.
Posted by Helen at 1:00 PM