Geert Wilders will be back 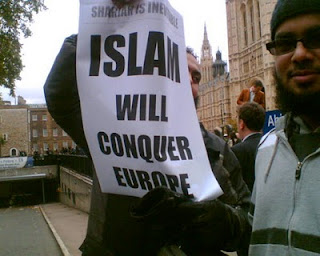 Geert Wilders, whose trial on charges of inciting racial hatred, is continuing in the Netherlands, is scheduled to return to Britain early in March. Once again he has been invited by the Lord Pearson of Rannoch to address both Houses of Parliament and assorted hacks from the media, show his film Fitna and explain his point of view with a question and answer session.

Reuters sums up the legal situation in the Netherlands with a curious contradiction that, possibly, the author of the article did not even notice.

The case is considered to be at the heart of the Dutch constitutional state, exploring the line between the right to freedom of speech and the ban on discrimination in the traditionally tolerant Netherlands.

Wilders is not actually discriminating against anybody but, it is arguable, the Amsterdam court is discriminating against him by trying him for exercising his right to freedom of speech. If found guilty on the various counts he can face imprisonment of up to one year and three months. One wonders what will happen in the normally peaceful country of the Dutch if the leader of the most popular party is imprisoned for daring to criticize Islam after a somewhat limited trial. (The court has refused to call the murderer of Theo Van Gogh as witness, for instance.) Let us not forget that, historically, the Dutch are not that peaceable.

HMG will not be able to stop Mr Wilders from coming to the UK as it could not last time though did the time before because the Asylum and Immigration Tribunal ruled in his favour last October. Bruno Waterfield quoted an unnamed British official:

The ruling is pretty crucial here - if he did try to travel it would be very difficult for the Government to stop him entering as the tribunal made it very clear they do not support the Government's position.

Well, indeed, though why this story is being reported from Brussels is something only the editorial board of the Daily Telegraph can tell.

At the end of the article we are once again reminded that Lord Ahmed has threatened promised to bring out 10,000 Muslims in an anti-Wilders demonstration but whether that he or Mr Waterfield are recycling old threats promises or whether new ones are being made is not clear. As readers of this blog will recall, last time barely thirty heavily bearded demonstrators materialized with carefully printed offensive posters. (See above.) But, of course, it is not they who spread hatred. No, no, no.
Posted by Helen at 1:32 PM