A strange but welcome development 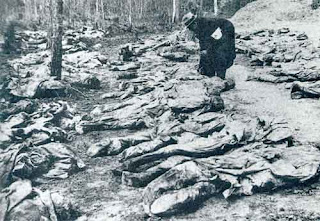 According to the BBC President Prime Minister Vladimir Putin has invited Polish Prime Minister Donald Tusk to the seventieth commemoration of Katyn in April. Putin has been known to dodge hither and thither in the minefield of Soviet history and this development is a peculiar one, given how much emphasis has been placed recently on the whiter than white record of the Soviet Union and the Red Army in the Second World War. The mass murder of Polish officers in Katyn and other places and the deportation of civilians, many to their death, did not actually involve the army but the NKVD in the ranks of whose successors, the KGB and the FSB Vladimir Putin served.

According to RFE/RL President Kaczynski plans to attend the ceremony as well, though he has not, as yet, been invited by his counterpart, President Medvedev. What will Putin's teddy bear do about it all? Is he being outflanked on the subject of criticism of Soviet crimes?
Posted by Helen at 11:47 PM