Let us not confuse things 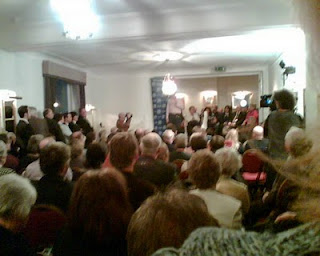 No, they did not serve tea; they did not serve cucumber sandwiches or buns or scones. No tea was dumped into the Channel. There were no hand-made cool signs, as an American correspondent put it; there were no signs or placards at all. In fact, it was, as the slightly amateurish pictures show, an extremely well attended fringe meeting with an enthusiastic audience, most of whom had come running from other meetings, main or fringe, that a party conference provides. Most of them were going on to other meetings or dinners.

As it happens, I am a veteran of packed fringe meetings. There were the early European Foundation meetings, at one of which every fire regulation was broken and the Head of the Commission's London office, having unwisely left the room, could not be allowed back in as there was quite literally not a square inch of space. "Health and safety" we told him with big grins on our faces and delegates who also could not get in laughed. The Conservatives have always seen themselves as somewhat rebellious as far as the EU is concerned - they laugh at the discomfiture of officials.

Then there were all the Save Britain's Fish meetings at both Labour and Conservative conferences where the full horror of the Common Fisheries Policy was carefully analyzed and dissected to packed rooms. And what good came of it all? We still have the CFP with successive governments whining about the reform that they are working on. The only sensible policy the Conservatives ever had, was discarded by the Boy-King as soon as he became the leader.

Ttoday's event proved something unexpected, however. It seems my history teachers who were told to slant everything towards a Marxist interpretation were actually right: the British establishment does have an uncanny ability to mould and remould itself, to include anybody who might challenge them and to co-opt potential oppositions. We have seen this with the blogosphere, that has been converted into the clogosphere plus a few supporting players with those of us who do not want to be inside the tent ever diminishing in importance. Now we see it with a potential tea party movement. Before it could even start, it was pre-empted by a fringe meeting at a Conservative Party conference, addressed by a Conservative politician and presided over by another Conservative politician, Roger Helmer MEP.

As ever Daniel Hannan MEP gave a stonking speech. He is good like that and if there is a little repetition in what he says that is not surprising. He is making speeches like there is no tomorrow. Once again he made clever jokes, quoted everyone from Burke and the Bible to Maynard Keynes. People were nodding, smiling, listening intently and applauding. 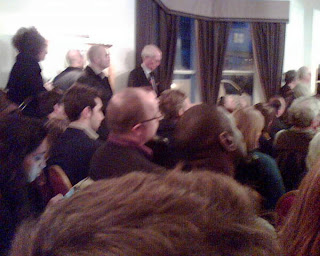 othing wrong with what he said either. He explained the power of the Commission and the way the fiscal crisis is being used to push through the notion of a common tax rate. Mind you, when he tried to break people's hearts with the tale of the Commission simply taking over the running of the Greek economy (actually, they have not yet done so), there was a singular lack of sympathy emanating from the audience. Wisely, Mr Hannan moved on.

He spoke eloquently of the control the executive in this country exercises over the budget as opposed to the situation in the United States (and a fat lot of use that has been to them). He is right, of course: we do not have proper separation of powers and as a consequence the government with a decent majority in the Commons will always push through whatever it wants, subject only to scrutiny in the Lords, whom Mr Hannan ignored, perhaps because he was concentrating on the budget which does not go to the Upper House. One wonders whether Mr Hannan would be interested in the idea of unbundling the budget and have the Commons debate individual departments' allocations as they do in the United States. He has never spoken about it.

Then he reminded us that the American tea parties, including the Boston one, relied on English ideas. This is, indeed, true, as are the various references he made to contemporary British politicians who supported the Americans (whom they viewed as British, really) against the monarchy. We can call these ideas Anglospheric and it is a tragedy that they seem to be dying out in the mother country. Mr Hannan's call for them to be reclaimed is entirely to be approved of.

Then we had a good deal of Mr Hannan's own subject - localism and the need to push power down as far as possible, the need to have local governments raising their own funds and making their own decisions, the need to reconnect politics with people. Part of that, he thought should be an annual review of the quangocracy by Parliament. (By the way, the whole quango system was a Conservative invention as a way of removing certain activities from the civil servants. Quangos, one may add, are staffed mostly by ex-civil servants and a permanent quangocracy.)

All fine and dandy. The trouble is that this was not a tea party organized by local activists as they have been doing in the United States for a year or so; it was a fringe meeting at a party conference and that party is hoping to win the next election. Mr Hannan is an active member of that party and eventually he had to face that and talk about what the Conservatives are going to do about all these matters, in particular about the fact that we are Taxed Enough Already.

Mr Hannan was on thin ice as nobody quite knows what the Tory plans are with regards to taxation and public expenditure beyond "being better than this lot". He did fine: told us that David Cameron and George Osborn entirely agree with him; ignored anything to do with the European Union; enumerated various promises Cameron has made on all these subjects avoiding the words "cast-iron guarantee"; and informed us that Cameron has gone further than any Conservative leader in adopting this agenda of reconnecting politics and people.

The trouble with that last point is that there is no evidence for it. Making various noises about Select Committees might be a good thing but this is not an issue that is of direct importance to most people. The point about open primaries, that Mr Hannan has made several times, is inaccurate. They are open in the sense that any local person can vote for the candidate but they are not open as far as those candidates are concerned: to get into the last six one has to be on the CCHQ list, thoroughly vetted and interviewed at least once by the local association. The jury remains out on Mr Cameron's intentions.

What one does hear on many a grapevine that far from reconnecting politics with the people, the Cameroonies find it hard to connect with their own members. If the Boy-King does not deliver that victory there will be a blood bath in the party. The Labour Party hated what Blair did to it but they got the pay-off: three handsome victories. The Conservative Party, by and large, dislikes what Cameron is doing to it and this shows up in the various rows; will he deliver the victory is the question.

In the meantime let me say that I agree with Daniel Hannan MEP: we do need to reclaim those ideas that have been so fruitful across the world where there is political freedom. It is appalling that the country where the Anglospheric ideas of small government, individual liberty, rule of law, rights of property, entrepreneurship and constitutional liberalism were born should be abandoning them. As a step towards reclaiming them some form of a tea party movement would be very useful. But first, we must reclaim the tea party movement like the blogosphere from the political establishment, particularly the Conservative Party. While they control it we shall get nowhere.
Posted by Helen at 11:14 PM